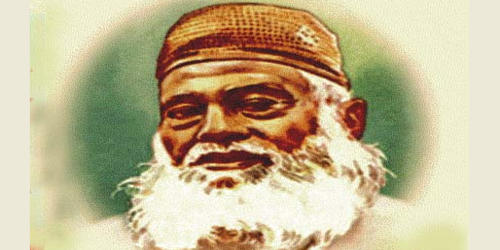 Maulana Bhasani (Maulana Abdul Hamid Khan Bhashani) is the man whom I like most for his rare quality and strong personality. I cannot but always remember him with great respect from the core of my heart. He was a popular political leader in British India, Pakistan, and later in Bangladesh.

I did not see him physically. But I have heard many things about my favorite man. I. have also read about him. I have gone through many articles written about him in journals and periodicals. Recently I have gone through a book, “Shatabdir Jana Nayak Maulana Bhashani” written by Khandakar Abdur Rahim. Through this book, I have discovered this great leader and I have realized his greatness. He remained a rural-based and non-colonially educated politician revered for selflessness and solidarity with the oppressed.

Though Maulana Bhasani lived like an ordinary man, he had no greed for wealth and he had no jealousy in mind. He always used to lead a humble life. He would live in a simple straws-built house and was quite indifferent to fame. He was a spiritual leader and he could foresee many things. His long political span takes the student of political history through British colonial India, Pakistan, and Bangladesh periods.

He gained popularity among peasants and the higher status emerging leadership of Bengali Muslims. Again, he always ignored the material gain. This great leader used to put on a very simple dress like Punjabi and a lung! made of course clothes and a cap made of palm-leaf. Nobody has ever found him to wear a suit or any modern dress. Nobody has ever seen him use warm clothes or shawl in winter. He was seen to be wearing only an ordinary wrapper round his body. He had never put on shoes but a sandal. Owing to his leaning to the left, often dubbed “Islamic Socialism”, he was nicknamed ” The Red Maulana”.

But he was a revolutionary leader who would always fight for the just cause of poor peasants and workers. He had fought to establish the right of working people, to remove the disparity between the rich and the poor, and to ensure social justice for the oppressed. He would never hanker after political power. He always fought for the oppressed people so that they might gain freedom from exploitation and oppression. He could easily amass vast wealth and build royal palaces in the capital city, but he did never think of it and he never did it.

He was uncompromising and unflinching to any threat of the rulers. He would utter thundering voice “Khamash” to the oppressors, autocrats, and exploiters. He did never bow down his head in the face of any threat or fear from any vested group or any quarter. He played a very critical role in the 1969 movement which eventually led to the collapse of the Ayub regime and the release of Sheikh Mujibur Rahman and other co-accused in the so-called Agartala conspiracy case against Pakistan.

Maulana Bhashani is regarded as the proponent of anti-imperialist, non-communal, and left-leaning politics by his admirers in present-day Bangladesh and beyond. He was an upright, outspoken, truthful, and courageous man. He always uttered and spoke the truth and upheld the flag of justice. He always protested against injustice and tyranny. He was the founder and President of the Pakistan Awami Muslim League which later became Awami League (AL).

Once again, Bhashani played a leading role at a critical juncture of the nation’s history by raising awareness about India’s hegemonic attitude. To conclude, he was always with the helpless, poor, neglected, and downtrodden and against, the illegal and the falsehood. He did never leave the village and the villagers and stayed with them till his last days of life. After his death, he was buried at Shantosh, Tangail according to his last desire. Such a man cannot but be honored from the core of heart. His legacy continues with the national resistance against India’s other dam projects in the upstream of common rivers.