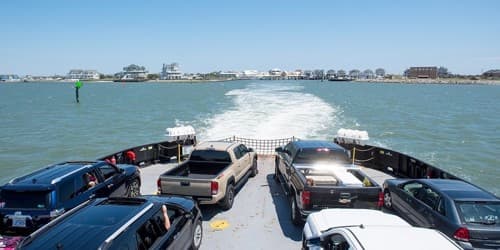 My First Ride on a Ferry

My First Ride on a Ferry

We arrived at the Ferry Terminal just as the sun was setting.  Only the ship’s officers ad a little space and this was on the bridge, which, along with the wheelhouse, was situated on a wooden platform erected over the engine-room. My father paid the fare at one of the toll-booths and we were ushered into a lane. We had to stop behind a row of cars to await the arrival of the next ferry. Here the captain of the vessel was in command. The bridge and wheelhouse were separated from the rest of the platform by a little wooden gate, secured only with a string catch.

Soon the moon was shining brightly. Presently a light yellow ferry arrived. Cars and motorcycles sped out of it. Then the green light came for us to board. My father carefully drove the car onto the lower deck of the ferry. It was an exciting new experience for me. I noticed the words “Pulau Undan” on a wall of the ferry.

The tall coconut trees silhouetted against the sky made a beautiful scene. The lights of the nearby houses and of the bridge threw beams of silver in the sea. As soon as the ferry was filled with cars and motorcycles on the lower deck, it left the terminal and proceeded towards the island. The sky was studded with stars. The view was breathtakingly beautiful. I stood at the front end of the ferry and watched the water churn and twirl as the ferry cut through it.

Time flew and very soon the two hours were over. I could see the island a short distance ahead of us. To our left spanned the Penang Bridge. The setting sun cast a red glow on the whole scene and I must say that it was beautiful. Soon the short ride ended. We hurried back down to the lower deck and got into our car when we saw Penang Island loom closer and closer.

Finally, the ferry docked and my father followed the row of cars out of the ferry. The car bumped a bit on the uneven ramp but soon we were on Penang itself. My first ferry ride was over. It was really wonderful. The memory still mesmerizes me.