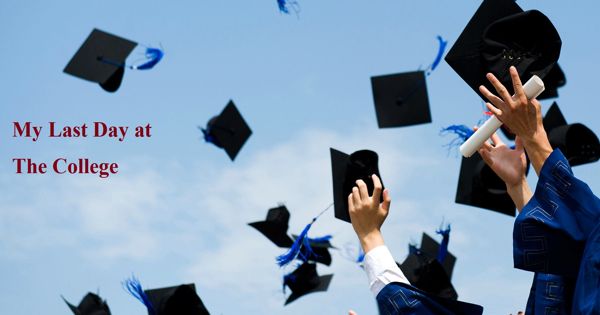 My Last Day at The College

My Last Day at The College

I will always remember my last day at the college. The test examination was over, the results were published. I was among the candidates who were sent up sit for the university examination. I had reasons to happen. It was good to feel that I had not wasted my time and that I had passed in all the subjects at the college test. I had come to pay my fees for the final examination along with a host of my class friends. Yes, we all felt merry and light-hearted.

It was a busy day. There was so much to be done. I had to get clearance certificates from the library and the laboratory. Records had to be hunted up, and the gentlemen in charge had to convince themselves that I had returned all property belonging to the college that I had been permitted to use. Those who stayed at the hostel had to get similar certificates from the hostel superintendent. On any other day, these transactions might well lead to impatience and irritation. But on this day of all days, we were all equally good-humored. The business took up much time, but tempers were not lost. At the counter, when the fees were being paid, a few on both sides were inclined to be high and mighty, but on the whole, we behaved admirably. Most of us were ready to make allowances, and so, at last, the task of depositing fees was over without much trouble.

I confess that, after the busy day had come to an end, I did feel a sort of vacuum in my mind. For three years the college had filled my life. While in it I was often critical and dissatisfied. One day perhaps, an expected lecture fell through, for the teacher was absent. On another day an angry lecturer pounced upon innocent me, and let me have it hot for a few painful minutes. Some lecturers bored me stiff; some others scared me out of my wits. Occasionally I had felt a desire to run out of it all anywhere rather than be cramped by such a lifeless monotonous routine. But now all that was forgotten. As I paced the corridors with a friend or two, we did realize how much we had come to love the old institution. There were teachers who genuinely took an interest in us, and helped us out of our difficulties whenever we approached. Even the most aloof, we often found to be really full of kindliness. The principal in his sanctum seemed so forbidding from a distance, but whenever we approached his with a prayer or a grievance, he was ready to listen to all that we had to say and to do something to help us and the clerks at the office-how often we had been rude to them, and yet on the whole how helpful they had usually been! Then there were the bearers, many of them had become quite friendly with us. Even the rooms had a charm; they were often associated with various memories never to be forgotten.

No wonder that when the time for parting came we were sad. We felt that we were leaving behind a precious part of ourselves. As for myself, as I listened to words of advice and encouragement from my teachers, and took leave of friends and acquaintances, and slowly passed out of the familiar college gateway, I felt really depressed and lonely. Somehow, it seemed that the best was gone; before me lay the unknown future, – dark, enigmatic, and forbidding.