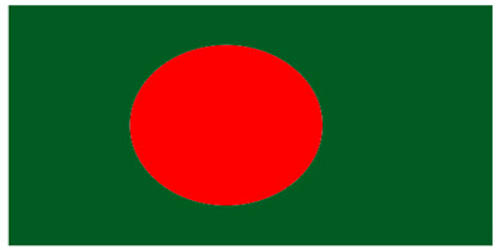 Our national flag is very beautiful to look at. It is rectangular in size, the length and breadth are 5:3 in proportion. The Flag has special characteristics of the flag. Firstly, The national flag must be rectangular. Secondly, The proportion of length-breadth will be 10:6. Thirdly, The length should be divided into ten parts. There is a round red portion in the middle. The remaining portion is deep green in color. One-fifty of the length will be the radius of the red sun in the middle. Lastly, Both of the length and breadth should be divided into two parts and straight lines should be drawn.

When the flag is hoisted it looks very nice and inspiring. It appears that a red sun is shining on a land full of green corns. The intersecting point of the two lines dividing the flag vertically and horizontally will be the center of the sun. The meaning conveyed by the flag: our national flag conveys deep meaning. The color of our national flag is Prussian green with a red sun in the middle. The green ground is the symbol of the green landscape of our country. The green portion denotes freshness and liveliness. The rising sun indicates our promising life and prosperity in the future. The blood-red sun in the middle stands for the massive amount of blood the freedom fighters and the people of this country sacrificed to win independence. It also sands for the glory of our country. Ours is a new state, we are proud to think that our nation and country are equal to any nation a country in the world. The bottle green color stands for the everlasting freshness, youth, vigor, and vitality of our nation. It is also the symbol of our national brilliance and past glory.