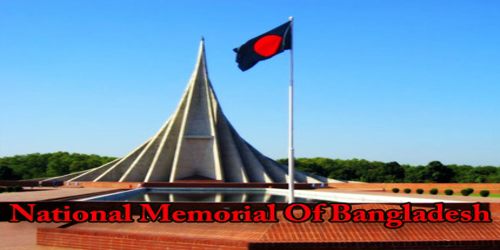 National Memorial is one of the greatest monuments constructed as a token of love, respect and remembrance for the martyrs of our Liberation War of 1971 and it is uniquely sublime soaring high in the sky. It is located at Savar, about 35 k.m. north-west of Dhaka, symbolizes the valour and sacrifice of the martyrs who laid down their lives for freeing our beloved motherland, Bangladesh, the then East Pakistan, from the grip of Pakistani occupiers. It was designed by Syed Mainul Hossain. Plans for the monument were initiated right after independence, in 1972. The main structure and the artificial lake and other facilities were completed in 1982. The monument is composed of seven isosceles triangular pyramid-shaped structures, with the middle one being the tallest. The highest point of the monument is 150 feet. There is an artificial lake and several mass graves in front of the main memorial. The architect has used concrete for the monument while all the other structures and pavements of the complex are made of red bricks. It symbolizes that it is built with concrete but made of blood.

Once one enters the main complex through the main entrance, she or he can see the monument axially but to reach it one has to walk through different ups and downs of the pavements and cross the artificial lake by a bridge. All these represent the struggle for independence, our freedom. The most moving sight of the complex is the several graves of the martyred freedom fighters: close to the towers. Standing in front of the graves, we bow down our heads in respect, as the towers soar up symbolizing the loftiness of the spirits of our heroes: the freedom fighters.