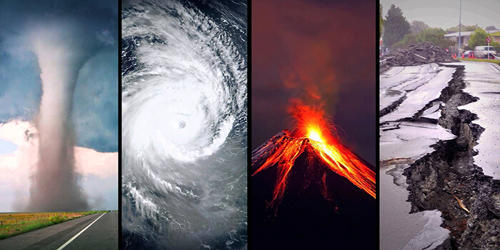 Natural disasters are natural events that cause the loss of lives and property. These have a significant impact on the public health and well-being of populations affected. Sometimes hundreds and thousands are killed, and millions of dollars of property are destroyed. Negative health impacts can be direct (e.g., injuries) or indirect (e.g., malnutrition and an increase in infectious diseases). What are these events and what causes them?

The earth is a dynamic entity that is undergoing changes all the time. Normal changes such as those occurring to the weather and the seasons are part and parcel of living. We live our lives according to these changes regardless of whether we like it or not. However, sometimes the forces of nature cause great and drastic changes, and for us puny human beings, the effect can be disastrous. Natural disasters are out of human control but the consequences of natural disasters overlap with the consequences of war or combat.

There are many types of natural events that can spell disaster for us. They include earthquakes, volcanic eruptions, tornadoes, hurricanes, floods, droughts, tidal waves, tsunamis, fires, landslides, and avalanches. In the aftermath of a natural disaster, these health issues are compounded by the damage done to health systems, water, and sanitation infrastructure, and the displacement of communities affected.

The earth’s crust is made up of a number of plates that sit on a sea of lava beneath. Displacement is quite common after major natural disasters due to increased homelessness. At some places on the crust, lava, ash, smoke, etc breaks through and the result is volcanic eruptions. Sometimes the eruption is so violent that it destroys living things that are near it. The eruption of Vesuvius in 79 AD destroyed the towns of Pompeii and Herculaneum. In 1883, the catastrophic explosion of Krakatoa off the west coast of Java generated tsunamis that killed hundreds of thousands of people in Indonesia. In 2004, underwater volcanic eruptions in the Indian Ocean caused tsunamis that again killed hundreds of thousands living nearby.

The plates of the earth’s crust are not static. They push and grind against one another producing earthquakes that sometimes cause widespread destruction to the affected area.

In addition to volcanic eruptions and earthquakes, other natural phenomena also bring destruction. In Malaysia, the Northeast monsoon rains that come around December bring floods to the east coast of the peninsula. In Australia, bushfires in summer destroy vast tracts of land. Snowstorms in the polar regions of the earth cut the residents from the rest of the world. Droughts in parts of India and Africa cause famine and tragedy.

No place on earth is totally free from disaster-causing events. We can only do our best to deal with these events when they occur. People and property are inevitably destroyed. This is complicated further by immense shortages of food and drinking water. Several medical and psychological problems among the victims are major offshoots of natural disasters. Those who survive to pick up the pieces and continue living. The number of deaths from natural disasters can be highly variable from year-to-year; some years pass with very few deaths before a large disaster event claims many lives.