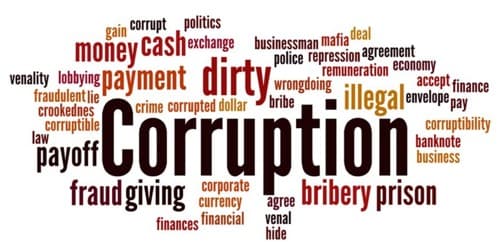 Nature and Remedies of Corruption

Corruption means to make or become defiled. It is a constant in society and occurs in all civilizations. In any department either govt. or non-govt. like ministry, office, school, college, university, law court, police station, hospital or in any place of work, corruption exists there. It has many different shapes as well as many various effects, both on the economy and the society at large. Even accident victims are not left unspared or untouched by corruption. Corruption has been putting his terrific hand on our vitals despite moral teachings, exhortations, slogans and learned lectures from the political and administrative platforms against corrupt practices. It also reduces tax revenue and the effectiveness of various financial assistance programs. Among the most common causes of corruption are the political and economic environment, professional ethics and morality.

In many countries, people in high places are involving or indulging themselves in corruption with impunity. Corruption thus inhibits economic growth and affects business operations, employment and investments. Corruption also percolates from above and reaches the lower level of society and administration. The judicial department of the country is an independent body that is not at all free from corruption. Major corruption thrives on a broad base of small corruption-payments or bribes. Truly speaking, the existing law of the land is probably corrupted and as a result, we can find injustice prevailing all over the country.

Corruption occurs in both the public and private sectors. The eradication of corruption is a crying need for the country’s greater interest. There also does not exist an unambiguous answer as to how to deal with corruption. To make the country free from corruption, citizens of all classes should be responsible accountable, dutiful, responsible and considerate. The political leaders should be politically talented, far-sighted, devoted to the nation and the land for the country’s sake, large-hearted and constructive. They should not be malicious and rapacious but be friendly to all. They should not shelter any corrupt or encourage corruption. The godfathers of corrupts should severely be dealt with, come what may. The persons in power should have transparency in decision-making and proper implementation of policies. Nepotism, favoritism, red-tapers, etc should be dealt with an Iron hand. There should be no judicial hesitation, hindrance, and procrastination in meeting out the due punishment to corrupts and culprits in proportion to the degree of their offenses. None should be allowed to be above the law and the land. There should be special courts for trial of the corrupts within the minimum possible Ilme.