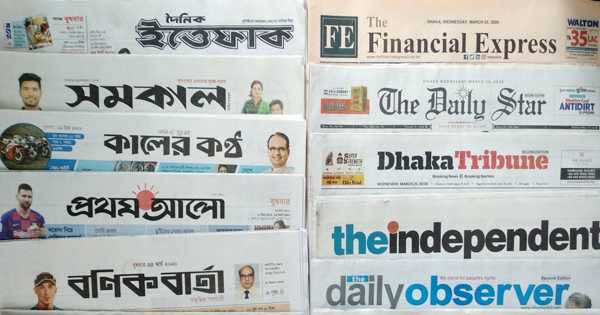 Introduction: There is a saying- Morning tea is not enjoyable without a newspaper. Again, the newspaper is a storehouse of knowledge and information. A sagacious philosopher remarked ‘A civilized man cannot go without a newspaper for a single day because it is vitally interrelated. Man is curious by nature. It is curious to learn what is happening to him. The paper having current news of the events and happenings of the different parts of the world is called the newspaper. John Bogart says when a dog bites a man that is not news but when a man bites a dog, that is news. Nowadays newspapers are alike our daily food. It is the most popular mass media all over the world.

Its history: The first-ever newspaper of the world named ‘The Acta Diurna (Latin meaning-daily happenings’) was published in Rome. Later, with the advancement of printing, newspapers started to appear in Germany, Belgium, and England. Newspaper in English came out first during the reign of Queen Elizabeth. It was called the Weekly News. The Indian Gazette, published in 1774, was the first newspaper in Indo Bangladesh. The Samachar Darpan, published in May 1818, was the first Bengali newspaper. It was brought out by missionaries of Serampore. The Dainik’ was the first newspaper during the Pakistani regime. Now newspapers have made much progress. Thousands of newspapers are being printed daily all over the world.

Kinds of newspaper/various types of newspapers and newspapers in Bangladesh: Newspapers are of various kinds. They are dailies, weeklies, monthlies, and even quarterlies. The daily newspapers contain news and views about the daily affairs of the whole world. There are some other papers which are known as periodicals and magazines. They contain literary articles. There are a number of English and Bengali dailies in our country. They are the Bangladesh Observer, the Dainik Khabar, the Bangladesh times, the Ittefaq, the Song bad, the Dainik Janakantha, the Inquilab, and so on. Kind of news flashed/Merits usefulness: In spite of the extensive use of radio and TV, we cannot do without a newspaper. The reason is that it gives us the details of politics, business, international affairs, science, literature, games, etc. that happens at home and abroad. We can know the economic situation of the country and the condition of various people of the world through newspapers. We also find trade news, sports news, and market news in newspapers. People of all walks of life can express their views in a newspaper both easily and more freely.

Demerits/Drawbacks/Abuses/Disadvantages: Although a newspaper is a benediction to the present, it also acts as a malediction. It sometimes publishes biased or partisan news. It excites public feelings. It sometimes also published exaggerated and sensational information. It creates misunderstanding and embitters relations between individuals, parties, and nations. Sometimes it misguides people by means of false and motivated news. Therefore people may turn unruly for no fair comes and the whole country goes under anarchy. That’s why to do, Razia Akhtar Banu. said. “To enjoy the sweet fruit of democracy, the newspaper must be faced with abuses.

Conclusion: In fine, we can say that modern life is not possible without a newspaper. It is the world’s mirror. So its contents should be sensible and full of variety so that it may benefit the readers. The freedom of the press is the first requisite for the freedom of the people. In no way, a newspaper should lose its sanctity and the ideals of healthy journalism. It may have defects but defects can be restrained if the authority concerned becomes conscious. It is fact that the newspaper is indispensable for our modern life. So we should go through it for our progress and all-around prosperity.