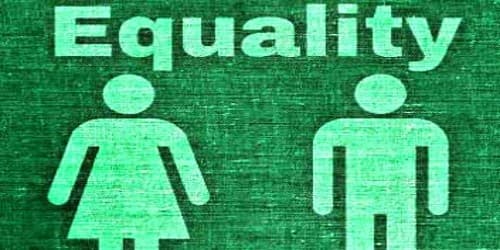 [This is a sample Open Speech on Gender Equality or Feminism. This speech can be used in any event related to Equality of Gender or feminism. You can modify the speech according to your circumstances.

Speech on Gender Equality or Feminism –

Feminism seeks an equal and just world. It seeks to dismantle oppressive systems of power based on patriarchal ideas about the role of men and women. The word feminism was coined in France in late 1800 says McCann& Kim,2003, “Femme” is French for woman, and ‘ism’ being French for “political position”, feminism channels for gender equality and women empowerment. (Describe in your words). But it is not just a term, it is a movement, a philosophical ideology, an approach and an end in itself.

Women and girls represent half of the world’s population and, therefore, also half of its potential. Woman are not only created to fit into glass slippers but rather be the manufacturers along with men. Moreover, gender-based oppression like the assimilation of sexes in their traditional gender roles and societal expectations, for instance, how a man is destined to be and to perform more aptly in high managerial posts. (Explain the actual problem and situation). Gender equality, besides being a fundamental human right, is essential to achieve peaceful societies, with full human potential and sustainable development. Feminine can also be a feminist. “Women Do Theory” clearly states that “Within feminist theory is a commitment to change oppressive structures and to connect abstract ideas with concrete problems for political actions.” (Describe all about the situation).

“Feminism is a movement to end sexism, sexist exploitation, and oppression”

Moreover, it has been shown that empowering women spurs productivity and economic growth. We teach girls to shrink themselves, to make themselves smaller. We say to girls, you can have ambition, but not too much. (Explain your suggestions). You should aim to be successful, but not too successful. Otherwise, you would threaten the man” She is so right when she says this. We live in a world of diversified culture. As soon as we are born we are identified as either male or female by examination of our genitals. (Describe your logic).

Deeply rooted in this patriarchal society are the roots of toxic masculinity. “But by far the worst thing we do to males — by making them feel they have to be hard — is that we leave them with very fragile egos. The harder a man feels compelled to be, the weaker his ego is.” (Describe on difficulties regarding this problem). Males are treated differently whereas Females are treated differently. Say, for example; Son hear stories about hunters whereas Daughter hears fairy tales.

Simone De Beauvoir in her journey to kindle activism has profoundly been known to state that, “One is not born, but rather becomes, a woman.” (Cordially describe your requirements and expectations). Nature versus nurture has always been under debate by psychologists and it needs to be hashed out this debate in a very light tone, aiding it with her personal experiences.