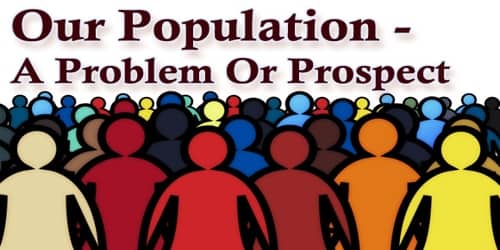 Our Population – A Problem Or Prospect

The population of Bangladesh is not a prospect; rather it is a problem. Bangladesh is a small country but its population is very large. It is going to be increasingly difficult for the country to provide food, shelter and other basic needs to her people. The problem has reached such an acute level that the population is now the number one problem of the country. The total fertility rate (TFR) has been reduced by more than two thirds since Independence. Current TFR in Bangladesh is 2.1 which means that women have 2.1 children on average in their lifetime. According to the 2017 revision of the World Population Prospects, the population stood at 162,951,560 in 2016.

If our population grows at such an alarming pace, our country will face a more serious crisis. This will affect the economic development and progress of the country. The country would not be able to give proper food, clothes, residence, educational facilities, medical facilities and other basic necessaries of life to this increasing population. The unemployment problem will be more acute. This will lead to the frustration of the youths.

Some people predict that in the near future more people will be homeless. They will not get ‘any land space for sleeping. Some people might say that the population is a prospect. Yes, that is true when the population of a country is turned into human resources. The scenario is quite different in Bangladesh. Due to poverty, Bangladesh cannot provide facilities to turn her population into resources. So the Population is always becoming a problem for the country.