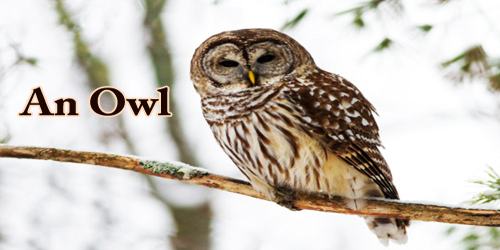 An owl is a nocturnal bird. It has a round head and flat face. Owls can have brown, gray, white, or black feathers. The color of their feathers helps them to blend into their environment so that they are safe. Its nails are very sharp. It kills rats, mice, etc. with its nail. They can grow between 6 inches and 24 inches tall- between half a foot and two feet. Female owls are bigger than male owls. There are about 200 types of owls and they all look a little bit different. Some of the more well-known types of an owl are the barn owl, the great horned owl, and the snowy owl.

Owls can be found throughout the globe except in Antarctica and some South Pacific islands. Worldwide there are more than 200 species of owls. They frequent a great diversity of habitats, from the Arctic tundra to deserts to tropical forests.

Owls stand out among birds because of what many people consider to be humanlike characteristics: their large eyes that look straight out of a facial disc, the tufts of feathers that look like ears, their deep voices. Throughout human, history owls have held a special place in our traditions, folklore, and myths, including being endowed with great wisdom and even magical powers.

Owls, like all birds, have a third eyelid in addition to the upper and lower ones. This third eyelid is called the nictitating membrane, and it protects the eyes and keeps them clean and moist. This membrane folds against the inside corner of the eye and comes out and across like a windshield wiper. It also provides protection when the owl flies through the foliage, but that is a secondary function.

Most animals can expand or contract the pupils of their eyes to adjust for different lighting conditions. Owls can do this to an extraordinary degree. It is not true that all owls hunt only at night. Both the Snowy Owl and the Short-eared Owl are diurnal, or daytime, hunters and also hunt at night. They have to because they live in the Arctic where it’s always light in summer. The Barred Owl also sometimes hunts in the daytime. Most owls, however, are crepuscular (active at dusk or dawn) or nocturnal.

Owls are carnivores, which means that they eat meat. They eat small animals like rats, frogs, and insects. Some types of owls hunt fish. Bigger owls like the eagle-owl eat skunks and monkeys! Most owls eat their food whole without chewing! They hunt for their food at night and catch it with their sharp talons, or claws. Owl species vary in size, from the tiny Elf Owl (a little over 5 inches) to very large species, including the Great Horned Owl (22 inches long) and the Snowy Owl (23 inches).

Besides their exceptional vision, owls also have extremely keen hearing. Their ear openings are directed forward and are much larger than those of other birds. The ears themselves are not visible because they are covered by feathers. The head tufts sported by some owls the Great Horned Owl and Eastern and Western Screech-Owls, for example, are actually feathers that have nothing to do with the auditory process. Owls have asymmetrical ears one with the central fold of the external ear directed downward, the other was upward. This enables owls to locate most sounds with remarkable accuracy.

It is hardly seen in the day time because of its sleeping. It comes out at night. It shrieks at night. It scars passerby at night. The crow is its enemy. If it comes out in the day time the crow attacks it. Owls play an important role in controlling populations of potential pest species such as mice, voles, rats, gophers, and shrews that damage crops and consume feed and thus owls are a great help to farmers. A Barn Owl, for example, eats one-and-a-half times its weight in prey in a single night and can kill 11,000 mice in its lifetime.

Owls generally do not construct their own nests, preferring to select a vacated nest built by crows, hawks, magpies, or other birds. To the Barn Owl, the rafters in old buildings are very compelling. Other species, like screech owls, select holes in old trees. Some species, such as the Snowy and Short-eared Owls, nest on the ground, while the Burrowing Owl nests in burrows underground, often an abandoned prairie dog or ground squirrel burrow.

Just like other birds, crows and peacocks, owls also have symbolic meaning in ancient culture. They are considered to be the symbols of death and evil.