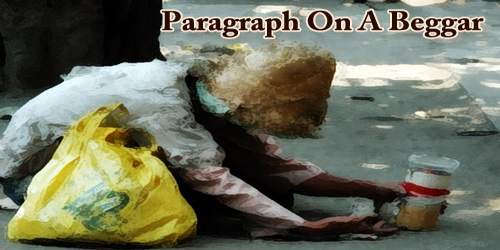 Paragraph On A Beggar

A beggar is a person who begs from door to door. There are some beggars who beg on the streets. They are called street beggars. Begging is not a profession. It is a social problem. Though beggars earn money by begging, they do not contribute to the economy. That is why begging is not regarded as work or profession. In fact, begging is the result of our poor socio-economic system. Beggars do not have any social dignity or recognition. They are ignoble persons in society. They live on the mercy of others. So everybody feels pity for them or looks down upon them. Begging creates a dependency on others, idleness, and self-pity in the beggar. Deprivation, extreme want, lack of work and lack of social security are the causes of this problem. Many people lose their everything in natural disaster like flood, river erosion or some fatal diseases and accidents and become so helpless that they turn to begging for survival. Breakdown of poor families and lack of support from the family members also lead many people to begging. Begging has negative effects on society and the economy. It is a loss of potential human energy and workforce. It also causes some social evils. NGO’s and micro-credit organizations can come forward to solve the problem by developing programs for the destitute people so that they can earn and live well. Govt. should have social security belt that will support the very poor-section of the society. Recently govt. is giving monetary help to the impoverished and older people. The amount of money and the number of beneficiaries should be increased. If rich people do their social responsibility and extend their helping hands, begging will reduce to a great extent.