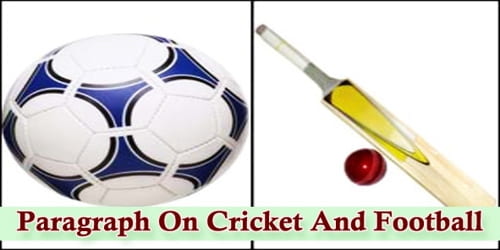 Paragraph On Cricket And Football

Cricket and football are two games played widely in the world. Some aspects of similarities and differences can be found between these two games. Previously, football was more popular than cricket in Bangladesh. But now a day’s cricket has become more popular than football. In the manner of playing, there are differences between the two games. In football, all the players play at the same time. The players play with a ball. There are two goalposts at some distance on two ends of the field. Each of the two teams tries its best to pass the ball through the goal post. The more goals a team can score the more points it gets. Win and defeat depend on the score of goals. A match continues for an hour and a little over than that. On the other hand, a cricket match is held in a different circumstance and continues for hours together. All the players do not play at the same time. Of the two teams one group does batting and the other group does bowling. However, there are some similarities in the nature of games. In football, there is a goalkeeper who tries stopping the ball from passing along the goal area. On the other hand, in a cricket match, there is a wicket-keeper whose function is to stop deliveries that pass the batsman. Win and defeat depend on the number of runs and the wickets. Whatever may be the differences between cricket and football, one thing is very common that both the games provide a lot of excitement as well as amusement.