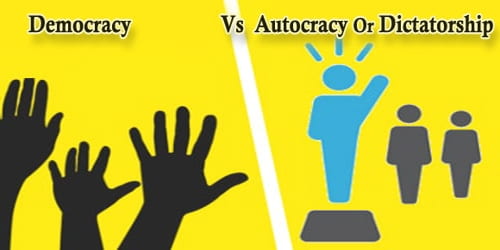 Paragraph On Democracy Vs Autocracy Or Dictatorship

Democracy and autocracy/dictatorship are the two systems of government. There are similarities and dissimilarities between the two. In a democratic system, public opinions are clearly reflected as the government is elected by people’s votes. It is said that. “Democracy is govt. of the people, by the people and for the people.” In such a government system, there is freedom of speech. Press or news media has the freedom to publish news and views. On the contrary, the autocratic government or a dictator is not an elected government. In this system, the government comes to power ignoring and disregarding public opinions. Sometimes, a dictator captures power, and after coining to power suppresses people’s opinions. In this system, the press does not enjoy freedom. In such a rule of the government, people are oppressed. Govt. holds absolute power, and absolute power might corrupt the govt. absolutely. However, sometimes an autocrat or a dictator can also be good for the overall prosperity of a country. It is said that if a dictator is honest he may take the country to progress and prosperity. In today’s world, people Prefer a democratic government. If democracy works properly there exists peace and prosperity and none suffers from injustice and misrule. However, there might be some anarchic situations in democracy. When people use freedom without responsibility, the situation is bound to get worse. Thus there are some positive and negative sides both in democracy and autocracy.