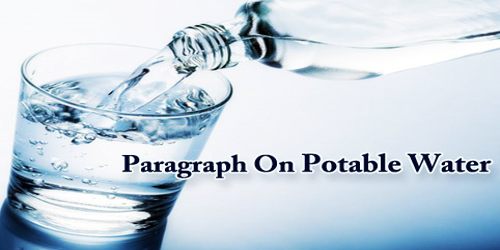 Potable Water, which is also known as ‘Drinking Water’, simply means water that is safe to drink, and it is becoming scarcer in the world. Increasing use is stressing freshwater resources worldwide, and a seemingly endless list of contaminants can turn once potable water into a health hazard or simply make it unacceptable aesthetically. The water, which is fit for drinking because it is clean and transparent. The Ph level of this water is 7. There are no microorganisms present in this water. The amount of drinking water required to maintain good health varies, and depends on physical activity level, age, health-related issues, and environmental conditions. Of the more than 2 billion people who lack potable water at home, 844 million don’t have even basic drinking water service, including 263 million who must travel 30 minutes per trip to collect water. About 159 million drink untreated surface water.

Globally, by 2015, 89% of people had access to water from a source that is suitable for drinking called improved water sources. In Sub-Saharan Africa, access to potable water ranged from 40% to 80% of the population. Nearly 4.2 billion people worldwide had access to tap water, while another 2.4 billion had access to wells or public taps. The World Health Organization considers access to safe drinking water a basic human right. Unsafe drinking water is a major cause of diarrheal disease, which kills about 800,000 children under the age of 5 a year, usually in developing countries, but 90 countries are expected to fail to reach the goal of universal coverage by 2030. Potable water is fundamental to human life, and we can expect it to be a growing issue for the foreseeable future.