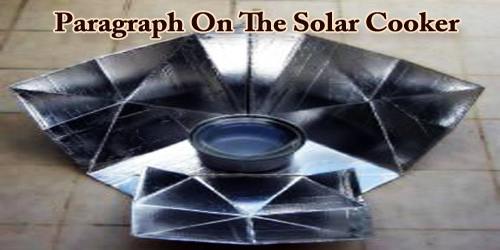 Paragraph On The Solar Cooker

The solar cooker is a device which uses the energy of sunlight to heat food or drink to cook. It is cheaper than Gas Oven. Solar cookers use no fuel, which means that their users do not need to pay for firewood, gas, electricity, or other fuels. Therefore, over time a solar cooker can pay for itself in reduced fuel costs. Since it reduces firewood use, the solar cooker reduces deforestation and habitat loss. Many solar cookers currently in use are relatively inexpensive, low-tech devices, although some are as powerful or as expensive as traditional stoves, and advanced, large-scale solar cookers can cook for hundreds of people. Since there are about 2 billion people who are still cooking on open fires, widespread use of solar cookers could have large economic and environmental benefit Solar cookers are a form of outdoor cooking and are often used in situations where animal fuel consumption is important, or the danger of accidental fires is high. The cooking time depends primarily on the equipment being used, the amount of sunlight at the time, and the quantity of food that needs to be cooked. Air temperature, wind, and latitude also affect performance. Food cooks faster in the two hours before and after the local solar noon than it does in either the early morning or the late afternoon. Large quantities of food, and food in large pieces, take longer to cook.