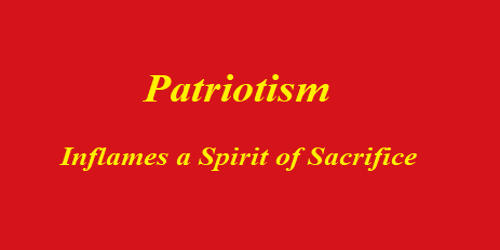 Patriotism – inflames a spirit of sacrifice

Patriotism – inflames a spirit of sacrifice

Introduction: Patriotism means the love of one’s own country. it is a noble virtue. it is a sterling quality of a man. it elevates his moral character and inspires him to lay down his life on the altar of his country. He is the most unfortunate man who has no sense of love for his motherland. Hazrat Mohammad (Sm.), the Prophet of Islam, said that Patriotism is a part of one’s belief in Allah. According to the Sanskrit proverb, one’s mother and motherland are greater even than heaven.

Value of patriotism: Patriotism inflames a spirit of sacrifice in a man. It inspires him to live for his country and die for his country. The progress and prosperity of a nation depend on the deep love of the individual members of the country. National prestige and glory should be a living reality to a true patriot. He should not live for his own interest being blind to the interest of his country and countrymen. He should bear in mind that motherland is superior to heaven. Patriots love their country and devote themselves to the welfare of their country. Patriotism is man’s inherent characteristic. The soil, water, sky, air, environment, culture–all these things of a specific country nourish the people living therein. So man’s body, mind, soul-the total being—is nurtured by various elements of his country.

The man who is a false patriot: False patriotism is very dangerous. Love of one’s own country is good but one should not look down upon other countries. Many crimes have been committed in the name of patriotism. It has been so much misused to fulfill the most selfish aims and narrow passions that Dr. Johnson said in disgust, “Patriotism is the last refuge of a scoundrel.”

Patriotism is pure love. It is more than human love for other individual human beings. In the words of Edwin Arnold, ” I love my life, true, but not more than I love my motherland.” To be more specific, the characteristics of which ornament patriotism include self-devotion, boldness, simplicity, unconditionality, gratefulness, dutifulness, respect, responsibility, and unselfishness.

The man who is a patriot: A true patriot always longs for the good of his country and countrymen. It is a noble sentiment that inspires him to place. The good of his motherland above his personal interest. He devotes himself to the service of his Country. So his countrymen always hold him in great respect and follow in his footsteps. He has no conflict with internationalism. A true patriot has a broad and liberal outlook. In times of danger or dependence, a true patriot becomes ready to sacrifice everything. He does not hesitate a moment to sacrifice his wealth, power, happiness, and all such.

Conclusion: In this world, there is no man who is not proud of his country. It is the purest of all his passions. To establish discipline, happiness, and to ensure affluence in peace times, the patriot works his best towards the accomplishment of the overall goals of his country by exerting all his might, honesty, and capability. There is no man whose heart is not filled with joy when he walks homeward after traveling in a foreign country.