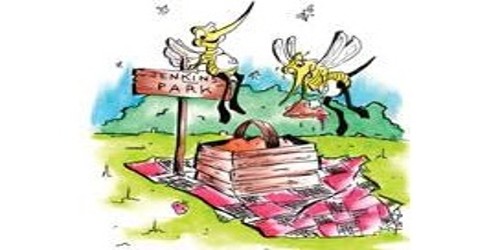 Paul Bunyan and the Mosquitobees

Paul Bunyan and the Mosquitobees (An American Tall Tale)

Paul Bunyan, the famous logger who was as strong as Hercules and Goliath combined, loved just about every creature in the world, especially his big blue ox, Babe. Paul loved his dogs, too. He loved Elmer, the moose terrier who was the bet rat hunter in the world; and Paul loved Sport even though Sport’s hind legs pointed straight up. As far as Paul was concerned, that was terrific because when Sport grew tired from running on his two front legs, he just flipped over and ran on the other two. Paul loved Fido, his shaggy watchdog, and he loved chickens and heifers and goats and mules, and he even had a fondness for the strange, gigantic Hugag who used to roam the Dakota woods. The Hugag had a body like a buffalo except it had long, stiff legs that had no joints, which was the reason the Hugag couldn’t lie down and had to sleep leaning against pine trees which, in the end, made Paul glad because those big Dakota pines were always leaning way over in one direction, and so they were easier to log. Yes, Paul Bunyan loved just about every creature in the world, but one day some creatures came along that Paul did not like one bit.

It happened this way.

Sourdough Sam was just cleaning up from breakfast when suddenly all the loggers came hiking back to camp.

“What’re you fellas doing comin’ home so early?” Paul asked the men. “You left here just a few hours ago.”

Sam nodded in agreement. “That’s right,” Sam said, and he proved that was true because he was just wheeling the giant prune stones from breakfast out of the kitchen. “It can’t be noon yet,” Sam said.

“That’s funny,” one of the loggers said, and he scratched his head. “If it’s so early, why’s it so dark?”

Because Paul was so tall, he was closer to the sky than anyone else, so he was the first to hear the sound. “I hear buzzing,” he exclaimed, and a couple of loggers climbed on Paul’s shoulders to listen. “Yep,” the tallest one called down. “There’s something flying up here, and it’s blotting out the sun.”

That’s when that something swooped lower, and they all saw what it was. Their mouths opened so wide you could have fit all of Sourdough Sam’s giant flapjacks in them, and Paul said what they all knew. “Fellas, this is one big herd of mosquitoes!”

Now, these weren’t the kind of mosquitoes you and I know. These were the ancestors of our mosquitoes, and they were huge. They were gigantic. They were enormous. And Paul knew just how big and tough those mosquitoes could be because awhile back he’d seen a couple of them picking their teeth with a heifer’s thigh bone.

So Paul asked all the men for ideas, and finally, Jonny Inkslinger, the camp clerk, said “Let’s call in a flock of giant bees from the coast. They’ll surely kill those mosquitoes.”

Paul sent immediately for a big package of Giant Bumble Bees; now these were much bigger than the bees we know, and luckily they arrived the very next morning.

Now Paul hadn’t liked those big mosquitoes, but he liked those gigantic mosquitobees even less. But Paul did not know what to do. Neither did Sam. Neither did Jonny. Not one of the loggers had an idea.

That was the end of the mosquitobees. Paul always felt a little sad that he’d met up with some creatures who couldn’t be his friends, but he sure was glad they never returned.