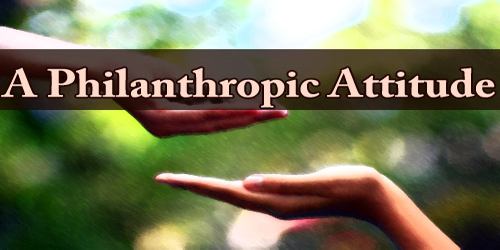 Among the myriad distinguishing qualities of human beings, the feeling of selflessness is utterly important. The materialistic gains can never be equaled with the gratification that an individual gets by elevating the condition of less privileged and helpless people. Feelings such as compassion, generosity, sympathy, and helpfulness assist mortals to recognize the true meaning of their lives. Imbibing these invaluable qualities in the personality adds more weightage and refinement.

Philanthropy, or the act of private and voluntary giving, has been a familiar term since it first entered the English language in the seventeenth century. Translated from the Latin term “philanthropia” or “love of mankind,” philanthropy permeates many social spheres and serves several social purposes including charity, humanitarianism, religious morality, and even manipulation for social control.

“No one is useless in this world who lightens the burdens of others.” A famous quote by prestigious writer Charles Dickens justifies the claim that each and every individual is worth entering the world who understands the plight of down trodden human beings. The light that is burned to illuminate the path of others always light backs the lives of benefactors.

The world is filled with the level headed personalities who kept an edge over the average people by doing something outstanding and unforgettable. The astounding decision by reverend celebrity J.K Rowling- about the donation of her millions in the charity that dropped her billionaire position to lowly millionaire is a commendable job. The lifelong service of Mother Teresa who donated her life to improving the condition of people with bad health is a benchmark in the field of social service.