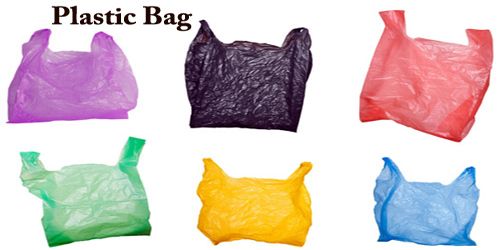 Introduction: Plastic bag is an important invention of modern humans, it was only for a short time from which was invented to widely used in human history. Plastic bags are one of the most commonly used things today. It makes our work easier and gives us a lot of conveniences. They have formed an essential part of our lives now. We use them almost every day for various purposes.

The usage is to the extent that we often get angry at the shopkeeper who refuses to offer us the plastic bag. It becomes daunting to carry your own bag every time. The shopkeeper’s refusal is due to the government ban on plastic bags. Plastic bags make our lives easier but at what cost? They damage our earth and environment. It is high time we all stop using plastic bags.

Effects on Environment: Non-compostable plastic bags can take up to 1000 years to decompose. Plastic bags are not capable of biodegradation but rather they photodegrade, a process by which the plastic bags are broken down into smaller toxic parts. In the 2000s, many stores and companies began to use different types of biodegradable bags to comply with perceived environmental benefits.

Synthetic plastic does not biodegrade. It pollutes the environment by just sits and gathers in landfills. Plastic particles are present in air at several locations around the world so the pollution of plastics not visible to the naked eye that is why Plastic packaging is a significant source of landfill waste and is commonly eaten by various marine and land animals, to fatal consequences. Environmentally, plastic is a growing disaster and now ubiquitous in our terrestrial, aquatic and airborne environments. Many plastics made from non-renewable resources extracted and petroleum or natural gas that destroy fragile ecosystems.

Regular plastics hold carbon that carbon released into the atmosphere when they melted or decomposed oft While biodegradable plastics not release carbon atom because no chemical involve during manufacturing process. Methane is another cause that affect the environment, which release from regular plastics. The manufacture of regular plastic exposes workers to toxic chemicals, pollutes air, land and water, which is carcinogenic.

International usage: The number of plastic bags used and discarded worldwide has been estimated to be on the order of one trillion annually. The use of plastic bags differs dramatically across countries. While the average consumer in China uses only two or three plastic bags a year, the numbers are much higher in most other countries: Denmark: four; Ireland: Germany: 65; Poland, Hungary, Slovakia: more than 400.

Stop Using Plastic Bags: There are a number of reasons to say no to plastic bags. We must stop using them to better our environment and save it from degradation. There are various eco-friendly alternatives that can be used to stop the usage of plastic bags.

Firstly, plastic bags are a major source of plastic pollution. As they are non-biodegradable, they take years to decompose. They contribute to a lot of waste which keeps collecting over the years. Plastic takes thousands of years to break down and decompose. It remains in the land which contributes to the rising problem of land pollution.

Similarly, it also causes water pollution. As people throw away the bags carelessly on the roads, in the drains and rivers, they enter the water bodies. They are carried away by winds in them and sometimes dumped into water deliberately. This plastic bag goes deep in the water and also hampers the aquatic life. Furthermore, plastic bags contaminate the soil causing hindrance to growth of plants. They seep into the soil after breaking down and remain there causing infertility in soils. The chemical hampers the soil and interferes with agriculture.

Most importantly, plastic causes the death of animals. The animals have no sense of what to eat and what to avoid. The stray animals gulp down plastic bags that get stuck in their bodies. In other words, this causes serious illnesses in their bodies. Sometimes, they choke to death after eating plastic bags.

Avoid Plastic Bags: Though it may be difficult to avoid the plastic bags at first, it needs to be done for the greater good. Plastic is slowly and steadily eating away our planet and damaging it. The government has banned the use of plastic bags but still, people continue to use it despite the ban.

In order to implement these laws strictly, the government must take strict action against the ones using it. Moreover, each of us must come forward to practice this ban and make it successful. We must not buy plastic bags from shopkeepers. Instead, we must refuse to take our groceries in them when the shopkeeper offers us.

Conclusion: We must carry our own cloth or paper bags for shopping. Try to pack our food in steel or aluminum containers instead of plastic ones. We must encourage children to avoid the use of plastic bags. If we see someone using it, we must call them out immediately. Never throw away the plastic on roads, as animals die after consuming it. We must come together to initiate a ban on plastic and make the world safer and healthier.