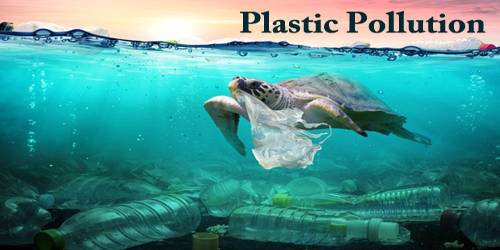 Introduction: Plastic has become one of the most used substances. It is seen everywhere these days, from supermarkets to common households. The main reason is the use of plastic is very cheap. It costs lesser than other alternatives like paper and cloth. This is why it is so common. Secondly, it is very easy to use. Plastic can be used for almost anything either liquid or solid. Moreover, it comes in different forms which we can easily mold. There are many forms of pollution that occur from oil spills, radioactive wastes, urban air pollution, the release of greenhouse gases, or agricultural pollution, and one of the most preventable, plastic pollution.

Furthermore, we see that plastic is a non-biodegradable material. It does not leave the face of the Earth. We cannot dissolve plastic in land or water, it remains forever. Thus, more and more use of plastic means more plastic which won’t get dissolved. Thus, the uprise of plastic pollution is happening at a very rapid rate. Every day, more and more plastic is accumulating in our oceans. Recreational boaters are not the only group that improperly disposes off plastic refuse at sea. Plastics also enter the marine environment from sewage outfalls, merchant shipping, commercial fishing operations, and beachgoers.

Plastic uses in daily life: Plastics are of various types and are widely used the daily lives. It is quite tough today to find a substance lacking plastic. Thermosets or thermoplastics are used in many goods.

Causes of Plastic Pollution: Plastics are used because these are easy and cheap to make and they can last a long time. Unfortunately these very useful qualities make plastic a huge pollution problem. Because the plastic is cheap it gets discarded easily and its persistence in the environment can do great harm. Unbanization has added to the plastic pollution in concentrated form in cities. Plastic does not decompose, and requires high energy ultra-violet light to break down, the amount of plastic waste in our oceans is streadily increasing.

More than 90% of the articles found on the sea beaches contained plastic. The plastic rubbish found on beaches near urban areas tends to originate from use on land, such as packaging material used to wrap around other goods. On remote rural beaches the rubbish tends to have come from ships, such as fishing equipment used in the fishing industry. This plastic can affect marine wildlife in two important ways: by entangling creatures, and by being eaten.

Turtles are particularly badly affected by plastic pollution, and all seven of the world’s turtle species are already either endangered or threatened for a number of reasons. Turtles get entagled in fishing nets, and many sea turtles have been found dead with plastic bags in their stomachs. Turtles mistake floating transparent plastic bags for jellyfish and eat them.

In one dead turtle found off Hawaii in the Pacific more than 1000 pieces of plastic were found in its stomach. A recent US report concluded that more than 100000 marine mammals die every year in the world’s oceans by eating or getting entangled in plastic rubbish, and the position is worsening world-wide, 75 marine bird species are known to eat plastic articles. This includes 36 species found off South Africa.

A recent study of blue petrel chicks on South Africa’s remote Marine Island showed that 90% of chicks examined had plastic in their stomachs apparently fed to them accidentally by their parents. South African seabirds are among the worst affected in the world. Plastics may remain in the stomach, blocking digestion and possibly causing starvation.

Impact of Plastic Pollution: Plastic Pollution is affecting the whole earth, including mankind, wildlife, and aquatic life. It is spreading like a disease which has no cure. We all must realize the harmful impact it has on our lives so as to avert it as soon as possible.

Plastic pollutes our water. Each year, tonnes of plastic are dumped into the ocean. As plastic does not dissolve, it remains in the water thereby hampering its purity. This means we won’t be left with clean water in the coming years.

Furthermore, plastic pollutes our land as well. When humans dump Plastic waste into landfills, the soil gets damaged. It ruins the fertility of the soil. In addition to this, various disease-carrying insects collect in that area, causing deadly illnesses.

Most importantly, plastic pollution harms the Marine life. The plastic litter in the water is mistaken for food by the aquatic animals. They eat it and die eventually. For instance, a dolphin died due to a plastic ring stuck in its mouth. It couldn’t open its mouth due to that and died of starvation. Thus, we see how innocent animals are dying because of plastic pollution.

Conclusion: Plastic bags and bottles, like all forms of plastic, create significant environmental and economic burden. They consume growing amount of energy and other natural resources, degrading the environment in a number of ways. We must use alternatives like cloth bags and paper bags instead of plastic bags. If we are purchasing plastic, we must reuse it. We must avoid drinking bottled water which contributes largely to plastic pollution. The government must put a plastic ban on the use of plastic. All this can prevent plastic pollution to a large extent.