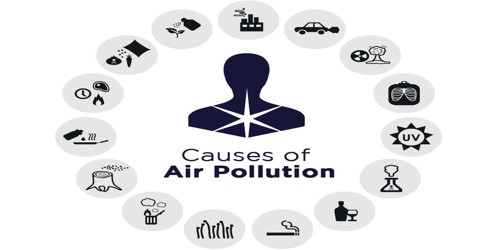 Pollution is now a commonplace term, that our ears are attuned to. It also affects the natural resources, living conditions and the cultural aspects of humans. Pollutions are one the greatest challenges that the world is facing today. The amount of pollution has increased due to the increase in population and the decrease in natural resources.

Pollution is a situation when something is added to the natural environment which is not naturally there; the natural environment is comprised of air, land, and water. Pollution has its own causes, effects, and solutions. Looking into these will help you identify the causes and what steps you can take to mitigate those effects. We can determine the types of pollution by the virtue of these three components i.e. we can say there basically three types of pollution: land pollution, air pollution, and water pollution.

Land pollution is the addition of toxic material in the soil. Our societies are primarily driven by industries; and, inevitably, we have become dependent on industrial products. Besides yielding certain products, there is certainly huge amount of industrial waste that is either buried in the land or thrown into the garbage. Imbalance use of fertilizers and poor drainage cause salinity which also causes this pollution. In both cases, they cause serious harm to the natural environment. They threaten the fertility of the land and disrupt the production of the crops.

Air pollution contains all contaminants that can be found in the environment, especially the atmosphere. This pollution takes place when something toxic or huge amount of gas is emitted into the atmosphere. The key causes of air pollution are the emission of carbon dioxide, sulfur dioxides, and nitrogen oxides. These gases disturb the natural composition of the atmosphere and cause many health issues including severe breathing problems. Most of this air pollution we cause results from the burning of fossil fuels, such as coal, oil, natural gas, and gasoline to produce electricity and power our vehicles.

Water pollution is a relatively new phenomenon, and one can safely utter that it is solely the result of industrial waste and nuclear waste which is thrown into the open seas and oceans. However, there is a significant contribution to our poor sewerage system. It has stuffed up marine life. This increase in pollution is harming our food supplies, drinking water and the environment. Admittedly, it doesn’t affect us in the short run but it does affect in the long run. This large scale pollution can then be spread across large bodies of water affecting many miles of water, agricultural land, animal habitats, and oceanic ecosystems.

As far as remedies are concerned we can say that there is only one remedy i.e. we ought to know the consequences and take responsibility for what we have done. There are multinational organizations such as the United Nations and World Health Organization that have proposed numerous solutions to the aforesaid issues.