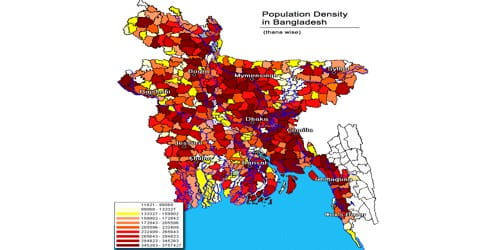 Population of Bangladesh – A Problem or Prospect

Bangladesh is a small country but its population is very large. It is the most densely populated country in the world. It is going to be increasingly difficult for the country to provide food, shelter and other basic needs to her people. The problem has reached such an acute level that the population is now the number one problem of the country. The Population of Bangladesh is spread throughout its districts.

The total population site of Bangladesh stood at 129.25 million in 2001. By the end of 2014, it was more than 160 million. The population density of the country is 832 per square km. With this density, Bangladesh is regarded as one of the most densely populated countries in the world. The population growth rate now is about 1.6%. It is assumed that the population will be 185.2 million in 2021 and 243.9 million in 2051. This will be catastrophic for the country. Life expectancy at birth is 59.5 years. The rate of child mortality per 1000 has come down to 76.8 and that of maternal mortality to 4.5. Though the population is an asset of a country, it has now become a burden for our country. Therefore, population growth must be kept under control.

Causes of high birth rate: many are the causes of the high birth rate in Bangladesh: Lack of education, Early marriage, Climatic influence, Low standard of living, Social and religious superstitions, Lack of recreational facilities, etc. Overpopulation has a negative impact on the development and economy of the country. It causes a food shortage, a communication problem, health problem, shelter problem, medical problem, unemployment, and poverty.

Ours is a small country of 1, 47,570 square kilometers with a big population of about sixteen cores. If our population grows at such an alarming pace, our country will face a more serious crisis. This will affect the economic development and progress of the country. The country would not be able to give proper food, clothes, residence, educational facilities, medical facilities and other basic necessaries of life to this increasing population. Unemployment problem will be more acute. This will lead to the frustration of the youths. Some people predict that in the near future more people will be homeless. They will not get any land space for sleeping. The population is no longer an asset but a serious liability for Bangladesh.

Some people might say that population is a prospect. Yes, that is true when the population of a Country is turned into human resources. Awareness should be raised among the illiterate and village people. We should impart people about the benefits of a planned and small family.  The scenario is quite different in Bangladesh. However, the government of Bangladesh has given much stress on the population control by identifying it as one of the main problems of the country. Due to Poverty, Bangladesh cannot provide facilities to turn her population into resources. So the Population is always becoming a problem for the country.