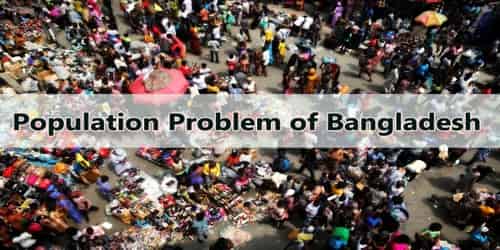 Bangladesh is the most densely populated country in the world. About 1200 people live per square kilometer. About 150 million people live in this small country with a total land area of, l,47,570 square kilometers. Every year more than two million people are being added to our population. Now it is evident that in comparison to our land and other sources, our population is growing at an alarming rate. The present growth rate of population in our country is 1.6%. It is obviously a very high growth rate. Dogmatism, prejudice, early marriage, superstition, fundamentalism, God-fearing tendency, etc. are responsible for this high growth rate of population. The area of Bangladesh is too small to support the vast population. As a result, it creates numerous problems, like food-shortage, communication disruption, educational problem, shelter shortage, health hazards, lack of medicine, environmental pollution, and poverty. Besides, the job facilities are also unable to cope with this increasing population. Being unemployed, some people are becoming addicted to drugs and are being involved in terrorism. So the standard of living, political stability, and cultural values are degrading day by day. There are crowds everywhere in buses, trains, bazars, schools, and colleges. The prices of things are increasing by leaps and bounds. People can hardly make both ends meet. To solve this problem people should be made educated and conscious. The government alone cannot solve this problem. Early marriage should be banned. No family should be allowed to have more than two children. It should inspire our people to adopt family planning. Our womenfolk should be educated. People must be aware of the serious consequences of a high birth rate. Mass media like radio, television, and newspaper can play a vital role in this regard. The people from all walks of life should come forward to co-operate with the government to solve this problem. Otherwise, all hopes and joys of the people of Bangladesh will be nipped in the bud.