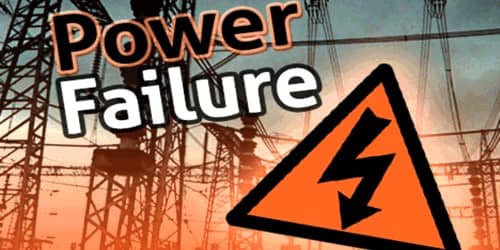 Power failure is known as a power outage. It happens in the way of a power cut, power loss, or black our of electricity supply to an area. One evening just as I was getting ready to watch a cartoon show on television, there was a power failure. Developing countries have an acute power shortage as compared to demand. The television set just went blank, the lights went off and the fan slowed down and stopped. As it was getting dark, I hoped that the power would be restored soon but it was not to be so. All our functions and comforts are entirely dependent on electricity.

To think of a life without electricity is almost impossible today. We find ourselves completely helpless in a situation where there is no electricity. Soon darkness enveloped the neighborhood. We hastily lit candles so that we could find our way around the house. As we had only three candles, my mother sent me to the sundry shop nearby to buy more.

“Sorry, no more candles”, was what the shopkeeper told me. The neighbors had bought up all the candles. At home, my father managed to dig out two kerosene lamps. We lit these too and kept the darkness out.

Without electricity, it would have been difficult to keep our house cool in hot summers by fans, coolers, air-conditioners, and warm in cold winters by room heaters. Without the fan running, it was oppressively warm. Furthermore, there was nothing to do but wait for the power to come on again. All of us sat quietly in the living- room. We had grown so dependent on electricity. Without it, we felt so uncomfortable. I used a book to fan myself.

Finally it was time for bed and still, there was no power. Nevertheless, I groped my way to my room, changed and lay quietly in the darkness. It felt so strange without the familiar lights around me. Anyhow, I fell asleep after a while. Without electricity, there would have been very few sources of entertainment. Television, home theatres, cinemas, etc., would have been rendered useless.

The power came back on only at dawn. By then we did not need it anymore. The power failure causes problems for students, inhabitants of cities, villages and in districts, students for the problem of preparing their lessons in time.  Electricity is a resource that comes with a cost. We should value it as a resource that has to be used carefully and wisely.