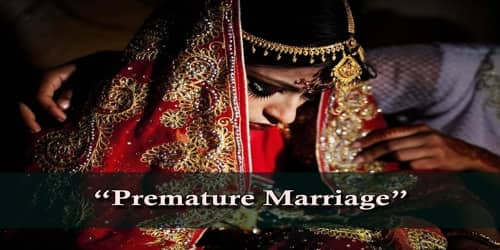 Premature marriage means a wedding between a young boy and a young girl before they are mature in the true sense. The girls or the extreme poverty-ridden families in the slums of the towns and cities and of villages are found to be married off before they attain the age of 15. The parents of their families cannot afford to send their girls to schools and so cannot provide them with jobs. Thus situations force the parents to get them married at an early age. Only poverty plays a key role here. Bangladesh has one of the world’s highest rates of early marriage. According to United Nations ICEF figures, 66% of Bangladeshi girls are married before the age of 18 and approximately a third of women aged 20 to 24 were married by the age of 15. Premature marriage may break down the young wife’s health. A young wife is being conceived to suffer from malnutrition and other diseases. In such a condition of her health, a weak baby is born with different complications. So this practice of premature marriage should be stopped. Our government has already imposed a ban on marrying a girl before 18 and a boy before 21. This was established with the national Child Marriage Restraint Act in 1929. This is a positive sign for us. To encourage female education our govt. has already taken some positive steps, such as giving stipends to girls, recruiting more female teachers, etc. This will also help in to stop the premature marriage. As women constitute about half of our total population, the overall development will be hampered unless the girls are taken proper care. At the international level, there are several legal instruments, which suggest the illegality of child marriage. The 1948 Universal Declaration of Human Rights declares that marriage can be entered into “only with the free and full consent of the intending spouses”. Additionally, the 1979 CEDAW prohibits child marriage, stipulating 18 as the minimum age in it’s General Recommendation 21.