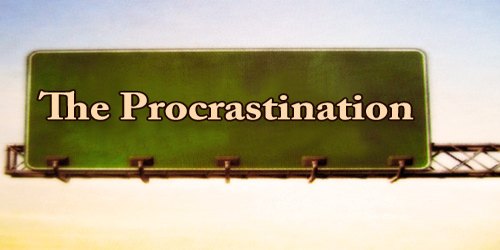 Procrastination is a phenomenon of people choosing quick and less critical tasks to perform instead of significant ones that take a longer time to complete because they want to get results faster and self-assert them. In other words, a person is not just lazy or does not want to do the necessary task. Instead, he/she is subconsciously afraid to proceed to the work realization because of its importance or scale. Moreover, scientists noted that in any country and at any time there are 20% of people who are marked as chronic procrastinators or procs. The main problem of procs is that they cannot emotionally overstep themselves if they are faced with a difficult task and postpone it until the deadline or even after it. Procrastination is a phenomenon that is mistakenly attributed to the problems of modernity, but its existence was noted centuries ago, in the times of ancient Greece. One of the evidence of this statement is the words that were written at 800 BC by the Greek poet Hesiod, who said: “Put your work off till tomorrow and the day after.” Similar trends can be noted in various books and films of the past, and that is why blaming modern technologies for the intensification of procrastination is incorrect.

The reasons for a person procrastinating can be varied. It depends on person-to-person and situation-to-situation. However, there are some universal reasons that cause people to delay their tasks and actions. One of the most important ones is the fear of failure. When a person delays doing an important task or is disinterested in finishing it, the cause could be a deep-rooted fear of failure. It is in human nature to avoid and fear failure. So by choosing to never finish the task, we can avoid the consequences as well.

At the same time, the scientists note three main traits that are inherent for chronic procrastinators, for instance, they usually suffer from their inaction, postpone difficult tasks because of their emotions, and do not learn from past mistakes. The first feature is expressed in the fact that postponing important tasks, the procrastinators are aware of the consequences of their actions and feel fear, anxiety, or torment of conscience but still do not proceed to the task. The second trait is expressed in the fact that people feel insecure in their desire to complete a task and explain this by a bad mood. Therefore, they postpone it in the hope that when the mood improves, they are able to return to the task. Consequently, the rapidly approaching deadline makes the person more stressed and reduces the ability to resist emotions that lead to the worse mood and another postponement. The third feature is that despite the experience gained in past cases of procrastination, people do not learn to avoid unpleasant consequences but only feel more stress caused by understanding future complications. Thus, these manifestations are, at the same time, causes and consequences of procrastination and are associated primarily with the emotional problems of the person.

While for ordinary people procrastination remains a reason for jokes, scientists have approached this issue with all responsibility having conducted diverse researches on the topic. One of the most effective methods was empirical tests on groups of volunteers, which clearly showed manifestations of procrastination associated with various external factors. The good example of the study was published in Psychological Science when one group of students was told that at the end of the lesson they have to write unimportant and fun math test, and another group thought that the result of this test would seriously influence their further education. The time before the test could be used for preparation or entertainment. As a result, the second group of chronic procrastinators deferred studying knowing that the test results are significant. The experiment clearly showed that procrastination is associated with the control of emotions and not time.

Another method that scientists tried to apply to research this issue is neuropsychology. Since some parts of the frontal lobe of the brain are responsible for human self-control, the study of the connection between procrastination and reactions in this part of the brain is expected to conduct. Nevertheless, the outcomes of the study were unexpected since chronic procrastinators had powerful connections with all the parts that are responsible for the different manifestation of self-control. These results most likely connect with the fact that the people themselves explained their feelings, so they were aware of their behavior. However, the research has led to the development of the methods that procrastinators can effectively use to solve their problem.

One way to stop procrastinating is to break down the dreaded task into little steps. If the work or the task is too overwhelming, we tend to procrastinate about it. But if the job is broken down, then we can tackle one step at a time without being overwhelmed. People can also create a detailed timetable or a timeline of some sort to help them with the steps. The main concern is not to over-focus or blame them self for procrastinating sometimes. We are all a victim to procrastination from time-to-time. As long as it does not derail our entire schedule, give our self a break and just get back to work!

Therefore, it can be noted that the study of procrastination on the part of science has led to the realization that this phenomenon can be a serious problem that threatens the mental and physical health of a person. In spite of this, not every postponing is a manifestation of procrastination, as well as not every person is a chronic procrastinator, but almost every person experiences this phenomenon at least once in the lifetime.

In addition, the researches made it possible to understand the origins of this problem and, consequently, the ways of its resolving. Procrastination is primarily a problem of a person’s perception and the ability to overcome one’s emotional barriers, while the correct approach to solving this problem and therapy if needed could give fast positive results.