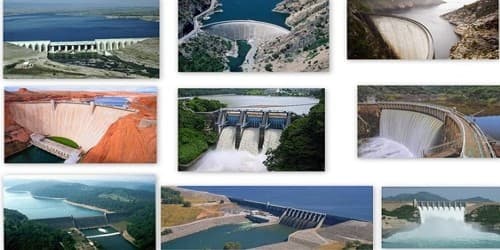 The damming of rivers to form reservoirs was common practice in Roman times, and probably much earlier. Over the intervening centuries, the practice has evolved for three main purposes; human consumption, irrigation, and industrial use.  In order to control the hazard of flooding that rivers can create, some people decide to build artificial structures that usually require machinery, to prevent a river from flooding. Since rainfall is never sufficiently uniform to provide a reliable water source from normal river flow, the reservoir has always been a great boon, spanning as it does lengthy periods of drought. There are, of course, other reasons for damming a river. Following heavy storms in mountainous areas more water than a river can carry will flow down to the plain, inundating large areas often destroying crops, homes and animal and human life. Mountain passes, if dammed, give the opportunity not only to control the flow of floodwater at its peak but also to retain large quantities for controlled use in dry weather. This control of waterworks from sea to river as well as from to sea.

Further use of the dam is to produce hydroelectric power, the power station, of course, being built below the level of the dam. Water is channeled through conduits and used as mechanical power for the turbines. It is then returned to the river. Reservoir water is also used today in vast quantities in nuclear power stations for cooling and other purposes and is similarly returned to the river or to the sea.

Some rivers in their natural state are not navigable by large vessels or run dry in seasons of drought. Where such rivers can be dammed they can be given a constant depth for purposes of navigation, and this benefits a country’s communication system.

More often than not a dam may be central in a multipurpose scheme including most of the functions outlined above. This is particularly true in countries lying in temperate zones, where water shortage can be a nuisance but is rarely a disaster.

Matters are different in underdeveloped countries which are hot, dry and barren. In these areas populations are often nomadic, driving flocks and herds from waterhole to waterhole, or scratching a mere subsistence from the soil. Drought means disease, hunger, dehydration, and death to animals and humans alike. The damming of major rivers such as the Nile is crucial to life itself, and the control of their floodwater for irrigation purposes essential, but even this is not preventing large tracts of North-East Africa from reverting to desert.

Perhaps of least importance is the social value of a reservoir. Some stocked with trout, provide good fishing, and most are used by sailing clubs, and for other aquatic sports. A reservoir is also a great attraction to water-loving birds and often becomes an interesting staging-post for migrations.

Damming a river can also cause problems. A great area of land, with its trees, flora and fauna, farms and houses, has to be inundated. Neither the resident, who have to resettle elsewhere nor the environmentalists, appreciate this. The problem is more acute when the countryside about to be spoilt is environmentally unique, as in a recent case in Australia, where attempts were made to involve Prince Charles and Princess Diana in the dispute. Creating an artificial lake inevitably changes the character of a large area. Farmland is destroyed, natural scenery, in the opinion of some, despoiled. People have to move, inconveniently.

A second drawback may be political. Many rivers flow through more than one country, that lying higher up the river having the whip-hand. A dam built for one country’s benefit may be much to the detriment of another. The USSR has been in dispute with Turkey over this matter as has Egypt with Sudan.