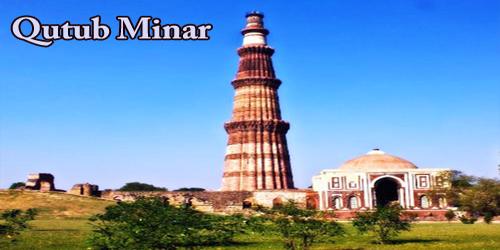 The Qutb Minar, also spelled as Qutub Minar and Qutab Minar is a soaring, 73 m-high tower of victory, built in 1193 by Qutab-ud-din Aibak immediately after the defeat of Delhi’s last Hindu kingdom. The tower has five distinct storeys, each marked by a projecting balcony and tapers from a 15 m diameter at the base to just 2.5 m at the top. The first three storeys are made of red sandstone; the fourth and fifth storeys are of marble and sandstone. At the foot of the tower is the Quwwat-ul-Islam Mosque, the first mosque to be built in India. It is a UNESCO World Heritage Site in the Mehrauli area of Delhi, India. The origins of Qutab Minar are shrouded in controversy. Some believe it was erected as a tower of victory to signify the beginning of the Muslim rule in India. Others say it served as a minaret to the muezzins to call the faithful to prayer. The Minar is surrounded by several historically significant monuments of Qutb complex. The minar’s topmost storey was damaged by lightning in 1369 and was rebuilt by Firuz Shah Tughlaq, who added another storey. In 1505, an earthquake damaged Qutub Minar; it was repaired by Sikander Lodi. On 1st September 1803, a major earthquake caused serious damage. Major Robert Smith of the British Indian Army renovated the tower in 1828 and installed a pillared cupola over the fifth storey, thus creating a sixth. The cupola was taken down in 1848, under instructions from Viscount Hardinge, then Governor-General of India. It was reinstalled at ground level to the east of Qutb Minar, where it remains. It is known as “Smith’s Folly”.

The development of architectural styles from Aibak to Tughlak is quite evident in the minar. The relief work and even the materials used for construction differ. The 238 feet Qutab Minar is 47 feet at the base and tapers to nine feet at the apex. The tower is ornamented by bands of inscriptions and by four projecting balconies supported by elaborately decorated brackets. Even though in ruins, the Quwwat Ui Islam (Light of Islam) Mosque in the Qutab complex is one of the most magnificent structures in the world. Qutab-ud-din Aibak started its construction in 1193 and the mosque was completed in 1197. Before 1976, the general public was not allowed access to the first floor of the minaret, via the internal staircase. Access to the top was stopped after 2000 due to suicides. On 4th December 1981, the staircase lighting failed. Between 400 and 500 visitors stampeded towards the exit, and 47 were killed by their crush and some were injured. Most of these were school children. Since then, the tower has been closed to the public. Since this incident, the rules regarding entry have been stringent.