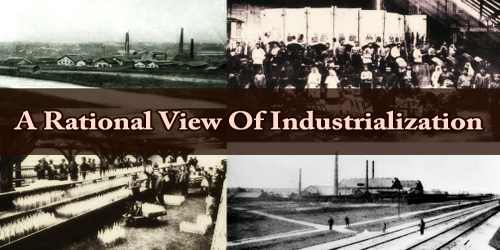 A Rational View Of Industrialization

Industrialization is the process, which is accompanied by the technological and organizational change which leads to higher levels of productivity, rising living standards, population growth, urbanization, cultural changes and shifts in the balance of power among nations. It also includes a rapid transformation in the significance of manufacturing in relation to all other forms of production and work undertaken within national or regional economies. Characteristics of industrialization include economic growth, a more efficient division of labor, and the use of technological innovation to solve problems as opposed to dependency on conditions outside human control.

We all agree that the growth of industries will increase our material wealth and that our needs in terms of food, clothing, and housing will be adequately provided. But man has other needs too-the need for human relationship, love and sympathy, the need for a sense of dignity and worth, and the need for a sense of security. These are also basic human needs, and if they are not satisfied, there will be individual discontent and social conflict. The industrialization has not helped to satisfy these needs. In fact, it has made matters worse. Let us look at the change in the nature of work itself. The independent work of the artisan has now changed into the work of the assembly line. A complete unit of work has been split into fragments of work, each worker now doing only one part of the work. This becomes a dull routine, and it denies the worker the joy and satisfaction of making some complete article. A weaver in the non-industrialized community, for example, weaved cloth with patterns and designs that required a high degree of skill and expression of artistic ability. As a worker in the mill, he is no longer a weaver, the loom has become the weaver and the weaver has become the loom attendant. His work may have become simpler, easier. But this itself has made him lose his sense of importance and dignity which he carried into his whole life as a human being. By being limited to only one stage in production and to a dull, monotonous routine, any worker not only suffers from lack of interest in the factory but also from a poor sense of his own worth in society.

Life in the factory was most challenging for the first generation of industrial workers who still remembered the slower and more flexible pace of country life. Factory employers demanded a complete change of pace and discipline from the village life. Workers could not wander over to chat with their neighbors or family as they would have done while working in the country. They could not return to the village during harvest time to help their families unless they wanted to lose their jobs. In the mill, the din and noise of machinery is so great and the worker’s attention is so constantly needed that it is no longer possible for him to have much social relationship with his neighbors. In fact, he works in an isolated social atmosphere. The strain of the speed of machinery also affects the worker’s life. Instead, they were no longer their own bosses; foremen and overseers supervised a new working culture to insure that workers’ actions were focused and efficient. A few workers were able to improve their lot by going into business for themselves or winning a job as a supervisor, but the majority saw very little social mobility.

Men’s work is not simply something that brings in money for support of the family; it is an activity that gives meaning to his life. So the modern machine weaver may have overcome his economic hardships, but he has not become a contented member of society. This does not mean that we should go back to the system of handloom economy, in the present times, that system cannot fulfill our material wants. And without material well-being we cannot have the sense of worth, dignity and security. Industrialization is not in itself an evil. It has brought many benefits. But we must try to remove its defects, especially in relation to the worker.