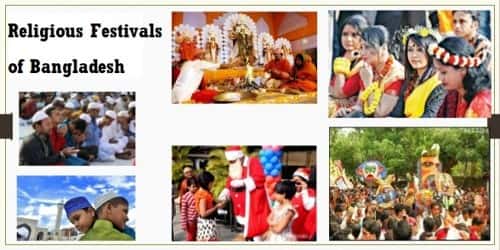 The two main religious festivals of the Muslims of Bangladesh are Eid-ul-Fitr and Eid-ul-Azha. Eid-ul-Fitr is observed after the fasting of the month of Ramadan. The biggest Muslim festival observed throughout the world. This is held on the day following the Ramadan or the month of fasting. In Dhaka, big congregations are held at the National Eidgah and many mosques. On Eid-ul-Azha people sacrifice animals for the satisfaction of Almighty. It is held marking the Hajj in Mecca on the 10th Zilhaj, the lunar month. Eid congregations are held throughout the country. Animals are sacrificed in reminiscence of Hazrat Ibrahim’s (AM) preparedness for the supreme sacrifice of his beloved son to Allah. Like all other social festivals, Eids return every year. Observance of Muharram is another popular Muslim festival of Bangladesh. 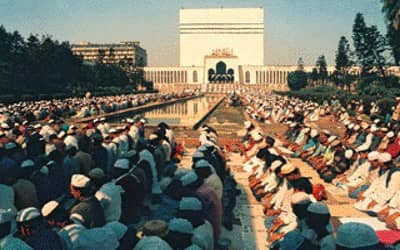 The biggest religious festival of the Hindu community in Bangladesh is Durga Puja. Usually, on the sixth lunar day of the bright fortnight in the Bengali month of Aswin, the ceremonial awakening of goddess Durga takes place. Durga Puja, the biggest festival of the Hindu community continues for ten days, the last three days being culmination with the idol immersed in rivers. In Dhaka, the big celebrations are held at Dhakeswari Temple, where a fair is also held and at the Ram Krishna Mission. Thereafter puja is performed for three days and then on the tenth day, the immersion of the image of Durga is held. Lakshmi Puja, Saraswati Puja, Kali puja, Menasha puja, Janmashtami, etc. are some other popular festivals of the Hindu community in Bangladesh. 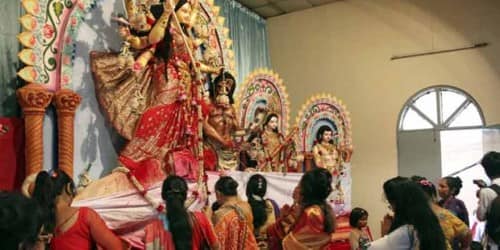 Christmas Day and Ester Sun Day are the main Christian festivals that are ostentatiously observed in Bangladesh. Christmas, popularly called “Bara Din (Big Day)”, is celebrated with pomp in Dhaka and elsewhere in the country. Several day-long large gatherings are held at St. Mary’s Cathedral at Ramna, Portuguese Church at Tejgaon, Church of Bangladesh (Protestant) on Johnson Road and Bangladesh Baptist Sangha at Sadarghat Dhaka. For more than one thousand years, the Buddhist community of this region has been celebrating Buddha Purnima or Baishakhi Purnima with great splendor. It is observed by the Buddhist community of the country, like all over the world. It is observed on the three full moon days of April, June, and September. This festival is celebrated in the memory of the birth of Buddha, his adoption of asceticism and attainment of supreme enlightenment.

Bangladesh is a country of festivals. There goes a popular saying – “Baro mashe tero parbon” – (Thirteen festivals in twelve months). This symbolizes a large number of festivals in our country. With the change of social and economic structures, the nature of festivals also changes. But some festivals are so deeply rooted in the social organism that they continue to entertain us from generation to generation.