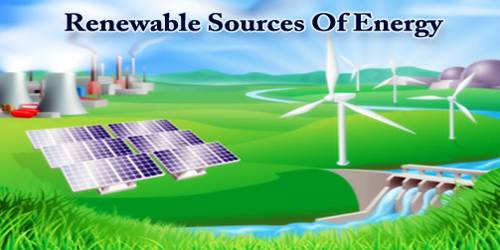 The present world is heading towards a serious energy crisis. Scientists predict that within the next fifty years the reserve of petroleum, diesel, coal, and gas will exhaust. Then the world will face a great crisis. It is true that the present civilization is running being ignited by especially oil. Thin fuel works behind all kinds of the generation of power. But oil is not found in every country. A few countries are the major oil exporters and most of the countries import fuel oil. But very soon the exporting countries will lose their reserve of oil. Hence, it is time we thought of an alternative sources of energy.

It might be surprising to know that resources such as solar power, wind, and water were utilized for human energy needs much earlier than fossil fuels were brought to use. In fact, sunlight was utilized first to make fire. Windmills and watermills were present in the days of kings and kingdoms. Until the middle of the 18th century, only renewable resources were available. They are known as renewable as they are present naturally on our planet and are inexhaustible when compared to fossil fuels. In our country, solar energy is becoming popular. It can save oil and other kinds of energy’ Biogas produced from garbage and cow dung can significantly meet up the shortage of electricity. The generation of electricity is very expensive. Hence, its alternative must be invented very soon. The population of our country is increasing alarmingly and so the demand of electricity is also increasing. Hence, we must think of its alternative. The sooner the better. We also have other forms of renewable energy such as Geothermal, Hydrogen energy, and Ocean Energy.

Today carbon emissions, intolerable pollution levels, global warming, climate change, and energy security are related factors that are pushing us towards a cleaner and sustainable sources of energy. Therefore, the renewable resources are not only clean and environment-friendly but are a must for progress and economic stability of the country. Renewable sources come with many limitations. They are not accessible all the time. So we need systems to store the energy obtained. At present, the government is thinking of the use of atomic energy in producing electricity. If it is implemented we can fight back the crisis of power. It will also make us forget about load shedding. So it is high time we thought of renewable energy.