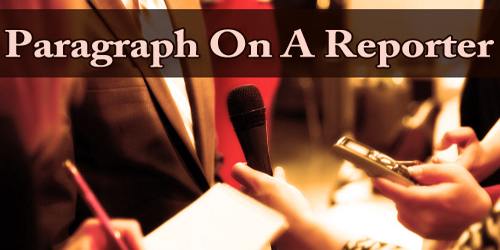 A reporter is a type of journalist and a person who collects news, researches, writes, and reports any place or sector of the country or from any county of the world on behalf of a certain newspaper or a news agency in order to publish it. He/she plays a very important role in the newspaper industry. He/she supplies various kinds of news to the news agency or newspaper, such as news of different happenings and events of political and economic aspects of social aspect, of educational institutions and so on. Reporters must tell the truth in their reports. Telling the truth is a very important part of all journalism jobs. Those who do not tell the truth may be punished like other workers who do not do their work. They can be suspended (do not work for a short time) or fired (losing their jobs).

Reporting can be a very fun and awesome job, but it can also be very scary and dangerous. One of the many things reporters get to do is interview anyone from bystanders and witnesses to big celebrities. Many reporters get the chance to get interviews with celebrities. Some are just normal interview and some are exclusive and go deep into a certain topic. A reporter should be an ideal person to supply true reports to the newspaper or news agency. If he/she is a reporter of false news, he/she will do harm to the nation or to the humanity. He/she must remember that this is a noble job for him/her. If he/she is noble, he/she will deserve recognition. He/she is a builder of public opinion in favor of or against an issue. The working conditions for reporters can be very hectic sometimes and their wages aren’t really a lot for what they do. For most reporters, they have to deal with loads of stress. For most reporters, their jobs are really hectic because they have to deal with the pressure of deadlines that could put their careers in the line. Sometimes, reporters, even air broadcasts where they have to improvise and make up words on the spot.