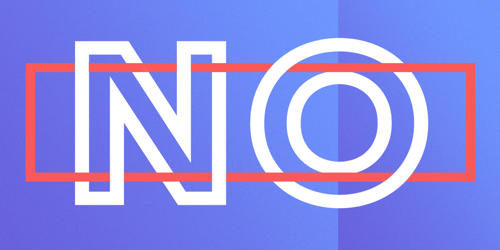 There are campaigns after campaigns exhorting the people to “Say No !”

The populace have been persuaded, coerced, bribed, threatened, punished, and even loved to “Say No !” to many social ills but there are still fans of this wayward lifestyle.

There is the campaign to “Say No !” to cigarettes. Huge billboards are put up at strategic places. Even the media (television, radio, newspapers) have been used but there is still smoke billowing in the air.

Previous to saying no to cigarettes, it was to drugs and bad traffic manners, road bullies. You name it, we had these campaigns.

It could be that when asked to “Say No !”, the curious wonder why and they are tempted to try. Once in, it is sure difficult to come out of the jungle. Even jungle guides and trackers have been known to lose their way in hills and the forests, what more a greenhorn?

Moreover, it could be that be emphasizing “Say No !”, the message that gets across is not “No” but the product that is banned.

A case n point could be the continued presence of “Mat Rempits” on our highways. Come the weekend, the whole future racers are on their machines, waiting for just the right opportunity to test their skills against the forces of luck and chance. Despite being maimed and despite lives being lost, these adrenaline-seeking youths have to qualms about competing with one another. What are a few bruises and cuts compared to the thrills and spills?

Would it not be better to conduct campaigns where the message is to “Say Yes !” Wouldn’t it be better to encourage safe driving, legal races, good nutrition, and healthy living? Wouldn’t it be more rewarding to say yes to continued education, good moral values, obedience to parents an caring for one’s life?

The fact that we are emphasizing the negative by the motto: “Say No !” is tantamount to adults and authorities telling youths to indulge in that we said to say no to? It has been proven by psychiatrists that the more you say no to, the more rebellious they become and the more eager they are to break rules.

I believe it would be far more effective to use a positive approach to curb social ills. A positive attitude assists in bringing out the innate goodness in youths. Before teenagers mature into mature adolescents, their raging hormones need an outlet. There must be avenues for them to release this burning desire to prove themselves.

Given the opportunity to expand their energies and live life to the fullest, let us change the way we exhort youths to mend their ways. “Say Yes !” to all the positive values that ensure a happy life.