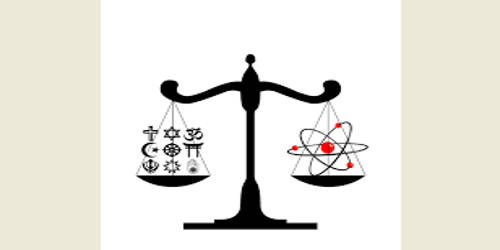 Science has concord in some places and also has some conflict with religion. This is the age of science. But religion is a belief in higher unseen controlling power. They have a reciprocal relation. Science is the most formidable truth in human history. Perhaps, this is the most obvious reason some people would like to prove the authenticity of religion by illustrating scientific theories which are otherwise completely incompatible with religion. Religion has its own appeal to mankind. But science and religion are two incongruous subjects. Some philosophers or scientist believes that religion and science both are related and also have conflict but my point of view religion can help science to achieve its goals and objectives.

Science deals with the material world that we know, religion is concerned with a divine order that we imagine. Science also deals with exploring things that already exist in the universe and the people don’t know about that or the people are confused about the things. Science believes in things that can be proved. Religion deals with ideas that cannot be proved. Science depends on reason, religion on the institution.

The scientist bases himself on material facts; religion takes its stand on spiritual ideas. The scientist works in the laboratory of the material world; the religion teacher probes into the recesses of the inward mind. The goal of science is an achievement and that of religion is realization. Hence there exists a hostility between the man of science and the man of religion.

Modern civilization is based on science, In every sphere of modern life, science is an inevitable and integral reality. It is beyond one’s imagination how many people are nowadays under the influence of science and technology. In the material world, we cannot remain isolated for a moment from science. But humans have to lead a spiritual life in addition to their material lives. To a human being, nothing is as true as death. We do not know where we have come from and where shall have to go. In a materialistic world, science gives us everything we need. This contribution is beyond any doubt.

It has to be admitted that man believes in religion absolutely, It would be impossible for him to take the material world seriously and life would cease to function. Fortunately, a compromise is made; the man pays lip service to religion and God and then gives himself up to worldly things. This leads him to practice unconsciously a whole series of deceptions. He lives a kind of double life.

Science and religion seem to go on side by side but there is a fundamental opposition between science and religion. Religion would be sought by men as long as there remains a feeling of helplessness before the uncertainty of an incalculable future. In his adversity, in his aging, man feels the necessity of turning to something for some sort of help and solace.

Hence science and religion will maintain their paralleled courses which, however, will never converge. It has been the case since man sought ways of gaining objective and knowledge. The only respect in which man has advanced or changed is this the modern man does not persecute the man of science as his curious, self many ancestors did in the past, although he may not like his materialistic gospel of life.

It is the religion that once hindered scientific developments. The conflict between religion and science is what naturally occurs to our minds when we think of this subject. In Europe churches executed many researchers and scientists. There are other stories of science and religion together. So the more we keep religion a lot from science, the better it is for mankind.