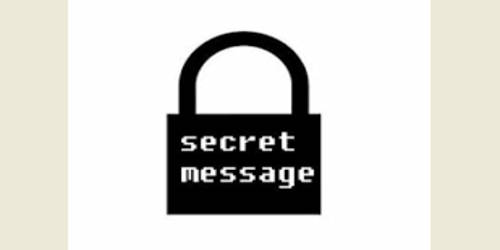 A Secret Message – an Open Speech

A Secret Message – an Open Speech

Inspector James was at his office that Sunday. There was an urgent case that needed his attention. A thirteen-year-old girl had been kidnapped near her home a few days ago.

It happened like this. Shirley, the kidnap victim, was walking towards her house when she was kidnapped by four burly men in a red van. Two of the men grabbed the poor girl and carried her into the van which sped off immediately. A neighbor had witnessed this incident who quickly informed her parents and together lodged a police report. The next day, a ransom note had been sent to her wealthy parents. demanding a quarter of a million dollars to secure her release. The police were trying all they could to rescue the girl and to apprehend her kidnappers.

That Sunday morning, Inspector James had received a mysterious message at his office. It was sent by mail in a white envelope and written on a plain white A4-size paper. It read:

The girl is saving for the moment. Hurry or she will be raped and killed when the ransom is paid.

The message was signed “A Friend”. Inspector James knew that what the message indicated could well be true. Shirley would have seen the faces of the kidnappers and they might well kill her when they had received the money to save themselves from being identified in the future.

But who had written the message? It seemed to Inspector James that it must be one of the kidnappers who did not want to be an accessory to murder. Inspector James scrutinized the piece of paper and turned it first one side and then the other. The writer had told him to hurry but he had not revealed the place where the girl was held captive.

He pondered over this message for a long while and then an idea struck him. He went to the wastepaper basket and retrieved the envelope in which the message was sent. There right before his eyes was the address of an industrial office building in Mamba Street. That was the actual message, the location of the kidnappers.

Inspector James quickly gathered a force of his men and raided the location. It proved to be true. the kidnappers, who thought that they were sitting pretty, were not prepared for the police raid and were quickly overpowered and arrested. The girl was found tied to a chair and was not harmed in any way.