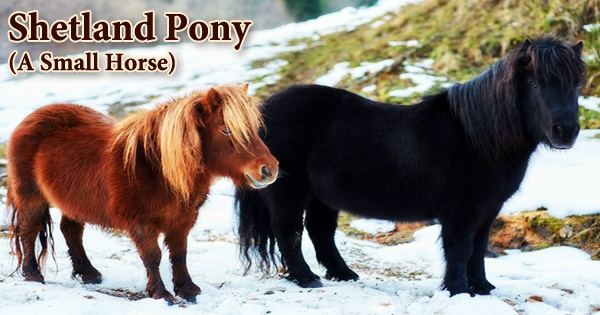 Shetland pony is a small horse breed that is common as a pet and mounts for children. It is a Scottish pony breed that originated in the Shetland Isles in Scotland’s north. At the withers, it can reach a height of 107 cm (42 in). The breed has evolved to cope with the harsh climate and limited food supply on the islands. It has a thick coat and short legs, is powerful for its size, and is used for riding, driving, and carrying. This famous pet is the tiniest of all pony breeds, and it can now be found in a variety of countries. They are often used as pleasure mounts and children’s horses, but they can also be used in show rings, both in the saddle and inside. Shetland ponies can be seen grazing on the hillsides and along the roadside. They’re mainly located on the West Mainland, Scalloway, Tingwall, Dunrossness, and Unst Island. Shetlands were used as pack horses before being transported to England in the 1850s to work in coal mines. They were also introduced to the United States at the same time, where a more advanced pony suitable for children’s riding was bred. The Shetland pony is the smallest breed of horse, with the exception of certain dwarf ponies that are the product of genetic mutation. Shetland ponies are native to the Shetland Islands, which are situated northeast of Scotland. Since the Bronze Age, small horses have been held on the Shetland Islands. People living on the islands most likely crossed the native stock with ponies brought in by Norse settlers later. Shetland ponies have roamed the exposed hills and moors of Shetland for at least 4,000 years. This unrestricted lifestyle has resulted in the creation of a distinct and hardy breed that is appropriate for the climate. The export of ponies had drastically decreased the number and quality of stallions in Shetland, posing a serious challenge to potential breeding patterns. As a result, in 1890, the Shetland Pony Stud Book Society was established to ensure that the breed’s purity was preserved.

Many scholars suggest that the Shetland Ponies originated from a cross between local stocks and those brought to the island by Viking settlers about a thousand years ago. Archeological excavations in Scottland’s Shetland Islands have shown that this equine has been present in the area since the Bronze Age. These species, on the other hand, left no definitive proof of their specific origins. Shetland ponies were originally used to pull carts, carry peat, coal, and other items, and plough land. Then, in the mid-nineteenth century, as the Industrial Revolution raised the demand for coal, thousands of Shetland ponies migrated to mainland Britain to serve as pit ponies, hauling coal underground for their entire (often brief) lives. They were also used to draw peat and seaweed carts, as well as pull plows. In recent years, it has mostly been used as a driving pony, as well as a pony for children to ride. Many citizens, including Queen Victoria, owned several pairs of Shetlands for drawing their smart phaetons, and the breed drew a lot of attention for children to ride and drive. Thousands of ponies left the islands in the last two decades of the nineteenth century, with estimates of over a thousand per year, and many were shipped across the Atlantic. The Shetland Pony Stud-Book Society is the international breed society for the standard Shetland pony. Since it evolved in the harsh conditions of the Shetland Isles, the Shetland Pony is hardy and sturdy. It has a small head, eyes that are widely spaced, and small, alert ears. It has a short muscular neck, a compact stocky body, short powerful legs, and a cannon-bone that is shorter than average for its height. A springy stride, a short long back, and a deep girth are all universal characteristics. It has a long, thick mane and tail, as well as a thick double winter coat to protect it from the elements. It may be any color of horse coat that isn’t spotted.

The ‘Shetland Pony Stud Book Society’ was founded in 1890, making the Shetlands the first pony breed to have their own breed society. Many of today’s registered ponies can be traced back to the first volumes of the Stud-Book, and we owe a great deal to the early stud owners’ expertise and determination in choosing the best ponies from the unregistered stock available to them. By the end of the nineteenth century, these equines had spread across the United Kingdom and were also being shipped to other nations. On the islands, a few Shetland ponies also perform typical work tasks, such as carrying peat (which is plentiful and used as a fuel source in Shetland) cut from the hillsides in big saddlebags. Even in the age of mechanized agriculture, their solid physique and ability to cross a variety of difficult terrain types make them a viable option for the job. Shetland Ponies are affectionately referred to as “Scotland’s Little Giant” by locals. This small pony is used by many riding schools to teach children general horsemanship, harness racing, and other skills.