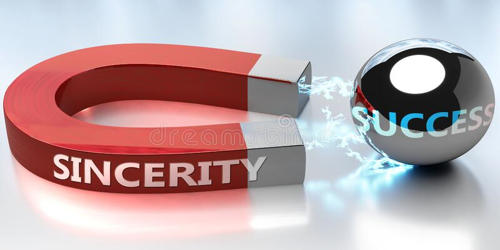 Sincerity is the Key to Success

Sincerity is the key to success

Sincerity is the root of the success of all work. One can go a long way if one does anything with sincerity. No doubt talent is important but sincerity can outsmart talent. The rich people are sincere to their work and they are capable of making anything a success. Sincerity is not to say everything you think but to mean everything you say. The great men are also sincere because they know that sincerity is the keystone to success. Those who do not follow the rules of sincerity can never go a Long Way in the world. Sincerity is nothing but a way of life. It is the passion with which you work towards the goal. The poor people are not sometimes sincere and they lag behind. If they do not know the benefit of sincerity, they cannot make good use of it. Sincerity is the tonic to any work because it helps the work to be done properly. If any work is not done properly, one will never get good output from it. So we should be sincere in every walk of life. Sincerity does not mean only to do any work properly; it also means dutifulness, honesty, and modesty.

A sincere attitude of youth towards work is very important. The people of our country are not still aware of the importance of sincerity. As a result, they do not do their work properly and it does not give good output to them. They are becoming spiritless observing their poor output. Youth who ignore the most important principle like sincerity often give in to greed, impulsiveness, materialism and that is what is responsible for their downfall. They blame their lot but do not think that they are not sincere to their work. It is we who are responsible for our poor condition. If we are aware of this fact, we can easily be sincere to our work.

Sincerity is the key to success. It is the tonic to any work. It helps us to do work properly. Sincerity develops with more awareness of your own feelings, being awake rather than in a waking sleep speaking and living unconsciously automatically. Sincerity makes a person true to his job and ensures that money, fame and other things remain secondary. By being sincere one can succeed in life. The great men of the world were sincere. But the people of our country are not sincere. So we should be sincere to shine in life.