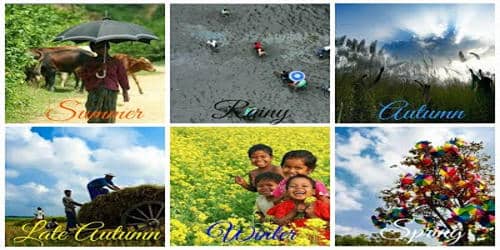 Introduction: The earth moves around the sun in a year. It is called the annual motion of the earth. The season changes here due to the annual motion of the earth. It causes six seasons in Bangladesh to change with the change of this seasons after every two months. Description of different seasons: The six seasons of Bangladesh are the summer, the Rainy season, the autumn, the Late Autumn, the winter and the spring. Seasons are the vital role of nature. Here nature changes alternatively after every two months.

The Summer: The months of Baisakh and Jaistha form the summer. The summer is the first season in Bangladesh. As this is a season of sun and heat, it is known to us a hot season. During summer the sun shines hotly. Summer is also the season of various fruits, various seasonal fruits ripe then. Mangoes, jack-fruits, blackberries, and melons are available in this season.

The Rainy Seasons: The rainy season is the second of Bangladesh. This season comes just after the summer. The months of Ashar and Shraban are the rainy season. It is a season of rainfall. It rains heavily now and then. Sometimes cats & dogs and sometimes in small drops. It cools the air after the burning heat of summer. Ponds, tanks, canals, and rivers are full to the brim in this season. The main two crops of Bangladesh rich and jute grow in this season.

The Autumn: The months of Bhadra and Aswin are called the autumn. This season comes just after the rainy season. The sky looks deep blue and flowers bloom in this season. It is a season of the light cloud without rain. Days and nights are almost equal.

The Late Autumn: The months of Kartik and Agrahayan form the late autumn. It begins just after the autumn. The sky looks blue and clear. It is a season of dew and farmers look happy. They are busy in harvesting perform the Nabanna. Harvesting of paddy then fills every mind with great joy.

The Winter: The months of Pous and Magh are called the winter. At that time the cold wind blows from the north. Nature looks dead and gloomy. It’s vary called tuen and days are shorter and nights are longer. Its a season of fog. Of course, many kinds of vegetables then grow in plenty.

The Spring: The spring is called the king of the seasons. In this season we are saved from biting cold in the winter. It comes with flowers and new leaves. Trees and plants look beautiful. The flowers bloom and give us sweet scent all around. It gives new life everywhere in nature.

Merits and demerits: Every season has its merits and demerits. In summer we have various kinds of fruits but it is very hot and stormy. In the rainy season, we get rain to cultivate our soil and grow crops. But men and animals remain confined to the thing in nature looks green, fresh, and joyful. In late autumn, the sky remains clear and cloudless. In winter everything in nature looks gloomy, dull, and dead. But vegetables and fish are available. The spring is the most charming. It is neither cold nor hot nor damp.

Conclusion: Every season comes with its own specialty and influences in our life greatly. There is a joy in nature everywhere thus moves the cycle of six seasons. The mind and the body of the people change with the change of the different seasons. Each season has it’s won influences on the people of Bangladesh. We are lucky to have six seasons in our country.