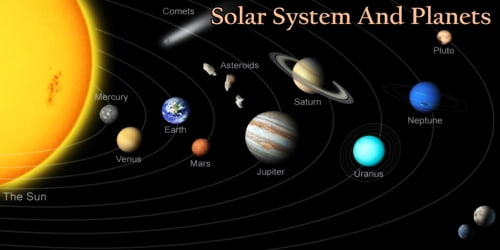 Introduction: Our solar system houses a big, bright star called the Sun. The Sun is a rich source of electromagnetic energy that it exudes in the form of light and heat. There are eight planets in our solar system namely, Mercury, Venus, Earth, Mars, Jupiter, Saturn, Uranus, and Neptune. These planets revolve around the sun in a fixed path referred to as the orbit. Several other smaller objects also move around the sun.

Here is brief information about each of these planets:

Mercury – The smallest planet in our solar system, Mercury is also the closest to the Sun. Its geological features consist of lobed ridges and impact craters. Being closest to the Sun, Mercury’s temperature sores extremely high during the day time. It can go as high as 450 degree Celsius. Surprisingly, the nights here are freezing cold.

Mercury has a diameter of 4,878 km. It does not have any natural satellite.

Venus – Venus is said to be the hottest planet of our solar system. It has a toxic atmosphere that traps heat. It is also the brightest planet and is visible to the naked eye. It has a thick silicate layer around an iron core which is similar to that of Earth. Astronomers have seen traces of internal geological activity on this planet.

Venus has a diameter of 12,104 km. Just like Mars, Venus also does not have any natural satellite.

Earth – Earth is the largest inner planet. Two-third of this planet is covered with water. It is the only planet in our solar system where life is known to exist. Earth’s atmosphere, which is rich in nitrogen and oxygen, makes it fit for the survival of various species of flora and fauna. However, human activities are having a negative impact on its atmosphere.

Earth has a diameter of 12,760 km. It has one natural satellite, the moon.

Mars – Mars, the fourth planet from Sun, is often referred to as the Red Planet. The iron oxide present on this planet gives it a reddish appeal. The planet is cold and has geological features similar to that of Earth. This is the reason why it has captured the interest of astronomers like no other planet. Traces of frozen ice caps have been found on the planet.

Mars has a diameter of 6,787 km and two natural satellites.

Jupiter – Jupiter is the largest planet in our solar system. It has a strong magnetic field. It largely consists of helium and hydrogen. It has a Great Red Spot and cloud bands. A giant storm is believed to have raged here for hundreds of years.

Saturn – Saturn is known for its ring system. These rings are made of tiny particles of ice and rock. Its atmosphere is quite like that of Jupiter as it is also largely composed of hydrogen and helium.

Saturn has a diameter of 120,500 km. It has 62 natural satellites that are mainly composed of ice.

Uranus – Uranus, the seventh planet from Sun, is the lightest of all the giant, outer planets. It has a blue tint which is because of the presence of Methane in the atmosphere. Its core is colder than the other giant planets. The planet orbits on its side.

The Formation of the Solar System: It is believed that around 4.6 billion years ago, the gravitational collapse of a giant interstellar molecular cloud gave shape to our solar system. The major part of the collapsing mass collated at the center that formed the Sun. The remaining mass flattened into a protoplanetary disk and formed the planets, satellites and other objects in the solar system. Planet Jupiter, the biggest planet in our solar system, contains a major chunk of the remaining mass.

Our solar system is believed to have evolved substantially since its inception. Many new moons have come into shape from the gases and dust around the planets. Several collisions among the celestial bodies have also occurred and still continue to occur thereby contributing to the evolution of the solar system.