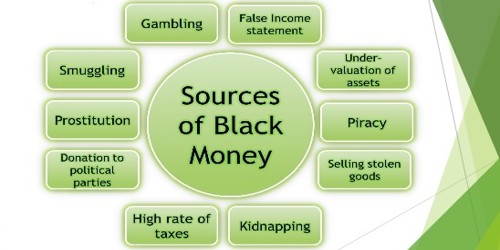 Black money is illegal money earned in an illegal way. It is the money on which income tax is not paid. It tells extremely about the economic development of the country. This money is earned through corrupt practices and not declared fearing legal action. So, we should abstain from such crime as can destroy society like cancer. It is one of the major drawbacks of a nation’s growth.

There are some sources of black money in the country. Illegal income earning from the sale commodities is one of the sources because the prices are beyond the govt. controlled prices. Corrupt government officials authorized to make policy and financial decisions and get perks/bribe in return. To gain from the sale of goods in a volume always exceeds the govt. quotas and regulations with respect to these goods.

The black money results from man’s tendency to earning more, enjoying a luxurious life, building high rising buildings and rapaciousness. The living standard in western countries is high. Transfer Mispricing is the process by which private firms generate black money. The logic used in this method is to manipulate the price of the transaction between two parties, so as to deceive tax agencies and benefit both the parties. The most favorite of the sources is hiding metals and jewelry.

It is easy to meet up human needs but there is no way to satisfy their greed. Anti-national, anti-social and criminal activities are also the sources of black money. Everyone under the sun wishes to be happy and prosperous by hook or by crook. On the other hand, the taxation structure does not favor the businessmen and the corporate sectors as well. Collection of black money by some corrupt individuals, damages the economic growth of the nation, as the money hidden from tax agencies.

Political uncertainty, election, clemency in dealing with the offenders and corrupted govt. officials perpetuate the causes which lead to the generation of black money. The money raised through anti-social criminal activities such as trafficking, smuggling, embezzlement, illegal drugs, and arms trade and prostitution. Black money increases the purchasing power of people, which results in higher prices of things. Corruption rears its ugly head in various forms like bribe, embezzlement, nepotism, and extortion. The govt. officials, accountants, CAs, businessmen, and anti-social elements join hands and devise efficient ways of evading taxes. Globalization along with weak institutional, policy, legal and implementation structures have further augmented the black money economy.