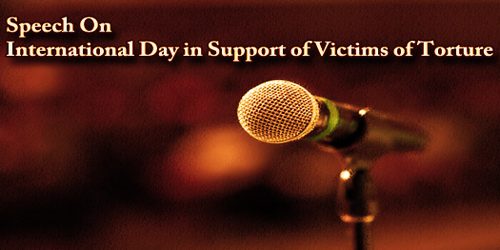 Speech On International Day in Support of Victims of Torture

A very Good Morning/Afternoon/Evening to Honorable Sir/Madam, respected teachers/seniors, and my dear friends, Warm Greetings to Everyone!

Thank you all for taking out time and being present at this seminar session. Today, we are here to celebrate the most important day, ‘International Day in Support of Victims of Torture’.

Annually, on 26th June, the United Nations ( UN) International Day in Support of Victims of Torture is conducted to remind people that human abuse is not only unacceptable; it is also a crime. Former United Nations Secretary-General Kofi Annan, 1998, said –

‘This is a day on which we pay our respects to those who have endured the unimaginable. This is an occasion for the world to speak up against the unspeakable. It is long overdue that a day be dedicated to remembering and supporting the many victims and survivors of torture around the world.’

Ladies and gentlemen, we know that torture aims to annihilate the identity of the victim, and denies the human being’s intrinsic integrity. Torture continues in all parts of the world, given the utter prohibition of torture under international law. Concerns about protecting national security and borders are increasingly wont to allow torture and other styles of cruel, degrading, and ill-usage. Its pervasive consequences often transcend the isolated act on an individual and might be transmitted through generations and result in cycles of violence.

We do learn, torture is a criminal offense under international law. It is strictly forbidden, and cannot be justified in any conditions, according to all the applicable instruments. This prohibition forms a part of customary law, which suggests that it’s binding on every member of the international community, no matter whether a State has ratified international treaties during which torture is expressly prohibited. The systematic or widespread practice of torture constitutes against the law against humanity.

The day (International Day in Support of Victims of Torture) was selected by the United Nations (UN) General Assembly for two reasons; first, on 26 June 1945, during the midst of the Second World War, the Charter of the United Nations signed the first international agreement which obliged UN members to protect and uphold human rights. Second, it was on 26 June 1987 that the UN Convention against Torture and Other Cruel, Inhuman, or Degrading Treatment or Punishment came into force.

Rehabilitation centers and human rights organizations around the world celebrate the UN’s International Day in Support of Victims of Torture on June 26 annually. The day is a reminder to folks that torture may be a crime. This event gives everyone an opportunity to unite and voice their opinions against human torture. Organizations including the International Council for the Rehabilitation of Victims of Torture and Amnesty International have been instrumental in coordinating activities around the world to support the day. Activities growing include: photo exhibitions; the distribution of posters and other materials to raise people’s awareness of human torture-related issues; and television advertising.

According to the latest 26 June Global Survey, in 60 countries around the world, at least 100 organizations have commemorated the day with conferences, seminars, peaceful marches, cultural and musical activities, children’s activities, etc. The UN International Day in Aid of Victims of Torture on 26 June marks the moment that the United Nations Convention against Torture and Other Cruel, Inhuman or Degrading Treatment or Punishment, one of the main instruments for fighting torture, came into force in 1987. Today 162 countries have ratified the Convention.

Each year the Asian Commission for Human Rights organizes international conferences in Asia. Anti-torture networks organized marches and public gatherings in different Asian countries still suffering from the systematic use of torture.