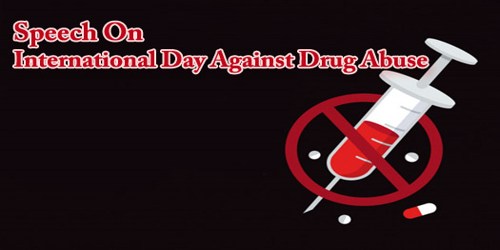 A very Good Morning/Afternoon/Evening to Honorable Sir/Madam, respected teachers/seniors, and my dear friends, Warm Greetings to Everyone!

Thank you all for taking out time and being present at this seminar session. Today, we are here to celebrate the most important day, ‘International Day Against Drug Abuse’.

The International Day Against Drug Abuse and Illicit Trafficking is a United Nations (UN) International Day against drug abuse and the illegal drug trade. By Resolution 42/112 of 7th December 1987, the General Assembly agreed to observe 26th June as the International Day Against Drug Abuse and Illegal Trade as an expression of its commitment to intensify action and cooperation to achieve the goal of a drug-free world community. The date June 26 is to commemorate Lin Zexu’s dismantling of the opium trade in Humen, Guangdong, ending in 25th June 1839, just before the First Opium War in China.

Ladies and gentlemen, we all know that many kinds of disinformation have ‘plagued’ the area of solving the opioid problem. This year’s theme aims to deepen awareness of the drug crisis worldwide and promote greater international cooperation to address its effect on health, governance, and security. Supported annually by individuals, governments, and numerous organizations around the world, this global observance seeks to raise awareness of the great challenge that illegal drugs pose to society.

Over the years the United Nations Office on Drugs and Crime (UNODC) has been actively involved in initiating efforts to promote drug policy support. Often the UNODC partners up with other organizations and encourages people in society to engage actively in these projects. Governments, organizations, and individuals in many countries, including Vietnam, Borneo, and Thailand, have actively participated in promotional events and larger-scale activities, like public rallies and mass media involvement, to push the attention of dangers related to illicit drugs.

The 2007 United Nations World Drug Study places the amount of illicit drug trade at US$ 322 billion a year. The UN has always been eager to help build a drug-free world culture.

I would like to inform you that, The International Day Against Drug Abuse and Illicit Trafficking is not a public holiday but a global observance.