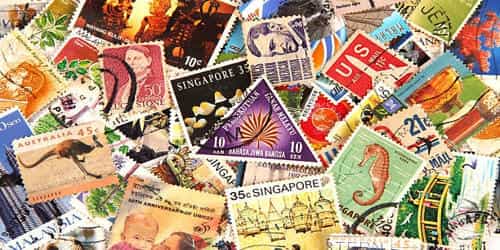 Introduction: Collecting stamps is a hobby that attracts people from all around the world. Stamp-collecting is the act of collecting postage stamps as curiosities. It is a favorite hobby for many. Stamp collection is a popular hobby. Unlike collections, stamp research is defined as stamp learning. You do not have to study stamp carefully to enjoy the collection.

Two-fold considerations: Stamp-collecting involves mainly two-fold considerations. Some take to it as an n interesting pastime. They collect stamps of various denominations and of various countries only to drive pleasure from them. They collect stamps, old and new, both local and foreign, and put them in albums. They allow a page to each country and try to ascertain and put the dates bellow the stamps as accurately as possible.

Educative value: Stamp-collecting is of great educative value. Stamps are issued generally on occasion of great national importance or in commemoration of great historic events. In the case of stamp collection, people in the stamp collection process have the opportunity to learn about various countries and commemorative stamps. Therefore, it gains better knowledge indirectly through the hobby. Thus they have great historical value and significance. They also contain pictures of various things, events, rare animals, and beautiful sights which are not only interesting but also of both historical and geographical value.

It teaches and educates people about history, art, geography, architecture, environment, mythology, movies, music, religion, culture, science and technology, modes of transport, space, sports, aviation, animals and plants, famous people, events, and many more. As one Goes on collecting stamps, one comes in direct touch with the historical, and geographical of many countries of the world. Thus stamp-collecting is both interesting and instructive.

Commercial value: The other aspects of stamp-collecting lies in its commercial value. Some take it as a profession. They collect stamps and out of their collection sell the rare ones at a very high price. Thus they earn a lot of buy stamp-collecting. There are instances when rare stamps are sold as invaluable curiosities for fabulous sums of money. Stamp collectors enjoy the moment when they get praised by family, friends, and other collectors regarding their stamp collections at stamp exhibits.

Philatelic society: The process of searching, locating and buying common stamps, new stamps, old stamps, rare stamps, or any other types of stamps which are needed in order to complete a specific type of stamp collection gives the stamp collector a sense of pride, success and accomplishment. Those who are interested in collecting stamps become members of the philatelic society. This society has its organization all over the world. It helps the stamp-collectors in procuring rare stamps of different countries of the world. Some collectors collect stamps on their own initiative also. A collector of stamps also can acquaint the foreigners with his own country, culture, and way of life by sending a selected collection of stamps to foreign countries.