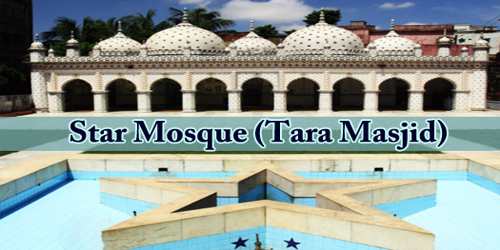 Star Mosque (Bengali: তারা মসজিদ; also known as Tara Masjid) is situated in Abdul Khairat Road, Armanitola, in the old part of Dhaka City, Bangladesh. The mosque is not dated by any inscription. It is known that one Mirza Golam Pir (Mirza Ahmed Jan), whose ancestors had come to Dhaka and settled in Mohalla Ale Abu Sayeed (present-day Armanitola), erected it. Mirza Golam Pir died in 1860, and hence the date of construction of the mosque may conveniently be placed in the first half of the 19th century. Built-in the Mughal style by Mirza Ghulam in the late 18th century, this mosque was originally a simple rectangular mosque, measuring 33′ x 11′ with three doorways on the east façade (main façade) and one on the north wall and another on the south wall. Three domes crowned the mosque, the central one being the larger. Towers accented the corners and the façades displayed plastered panel decoration.

Originally it was an oblong (10.06m x 4.04m) three-domed mosque. There were three mihrabs on the Qibla wall in alignment with the three doorways of the mosque, of which the central one was larger than the side ones. The prayer chamber was roofed with three domes, the central one being taller and larger than the other two. The domes are carried in the interior on squinches. The original mosque building was not as decorated as it is now. The dilapidated plain and naked wall of the western side bears witness to the plainness of the past. The three southern doorways of the mosque are no doubt the old ones. Star Mosque was first built by Mirza Ghulam Pir, as a three-domed oblong edifice. But an over-enthusiastic and zealous merchant named Ali Jan Bepari completely remodeled and reconstructed it with extremely delicate and richly colored tiles of variegated patterns. Ali Jan has added the new verandah, which is mentioned in the introduction, on the east and spent lavishly on importing Japanese and English decorated China clay tiles to improve the inner and outer show of the mosque. It is now a five-domed structure. In 1987, two domes have been raised on an extension to the northern side without any respect to its antiquity, architectural style, and decoration. The mosque is decorated with Japanese and English china clay tiles and used both methods of the Chinitikri application. One approach uses solid color, cut clay tiles, and form patterns through the placement of these colored tiles in white plaster. The domes and the exterior surface are covered with different colored star-shaped China clay tiles. The upper portion of the eastern façade also incorporates a crescent motif. The outer wall between the doors is decorated with the motif of Fujisan (Mount Fuji) on glazed tiles and a crescent-and-star design decorates the upper part of the facade. Hundreds of blue stars have been created on the domes of white marble. All over the mosque, the motif of stars dominates the decoration and so the mosque is called the Star Mosque (Tara Masjid).