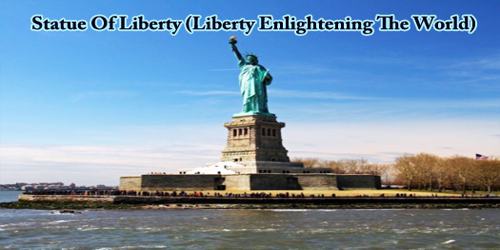 The Statue of Liberty (Liberty Enlightening the World) is a statue situated on Liberty Island, formerly Bedloc’s Island, in the harbor of New York. The statue symbolizes liberty in the form of a woman wearing flowing robes and a spiked crown. It is one of the greatest works of its time and still stands today as a meaningful entity of independence to the world. The statue is a great tribute to the concept of global freedom that had its roots in America. It was created to display the worldwide objective of peace and tranquility. The fact that another model of this icon stands today in a world capital shows the effect that this figure has inscribed upon the world. Over the years, “Lady Liberty” has been a symbolic icon to people all over the world. To some people, her presence means freedom and a new beginning. She holds a torch aloft in her right hand and carries in her left hand a book inscribed “July 4, 1776”. The broken chain symbolizes the overthrow of tyranny. It lies at her feet. The statue was designed by the French sculptor Frederic Bartholdi and was given by Franch to the United States to commemorate the centennial of US independence in 1876. France raised funds by popular subscription to pay for the statue; US donors financed the pedestal and installation of the monument. President Grover Cleaveland dedicated the work on 28th October 1886. The statue was administered by the United States Lighthouse Board until 1901 and then by the Department of War; since 1933 it has been maintained by the National Park Service as part of the Statue of Liberty National Monument and is a major tourist attraction. The statue, the Island, and nearby Ellis Island were declared a national monument in 1924. The statue is formed of copper sheets riveted to an iron framework. It is one of the largest statues in the world. It measures 93.5 m (306 ft 8 in) from the bottom of the pedestal to the tip of the torch. The figure itself is 46.4m (152 ft 2 in) high; the right arm is 12.8m (42 ft) long; the hand is 5.03m (16 ft 5 in) long; and the head, which is reachable by staircase or emergency lift, measures 8.5m (28 ft) from neck to diadem and 3.05 m (10 ft) from ear to ear. The statue weight 254 tonnes (250 tons). Originally it was conceived as a gesture of international friendship. The statue has become a global symbol of freedom, marking the arrival of millions of immigrants to the United States.