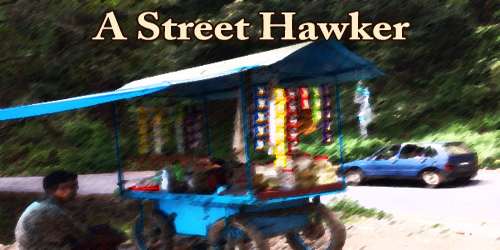 A man who sells various things by moving from street to street is a street hawker. He is a self-employed person. He is the familiar figure in the cities and towns. He raises a strange outcry to draw the attention of his customers. He wears a peculiar dress of different colors. He tries to attract the attention of the customers by using different tricks. He carries his goods either in bundles or in a basket. Sometimes he walks about with his goods on a wheeled platform. His customers are usually children and women. As they credulous they agree to pay whatever price he demands. So He does not like elderly men. He usually sells toys. Cosmetics, ready-made garments, daily necessaries, utensils and balloons of various colors and shapes. Children gather round him and woman hail him. He is a clever man. He goes out his moving shop when the elderly people are out on duty or business. He demands a higher price for his things but he sells his things at a cheaper rate.

A street Hawker lives a life which is very hard. He can earn money that can hardly support him. He can hardly make his both ends meet. He leads an adventure life. Like a poor man he work is all through the day and thus he supports his children. However, he is an expected person for some people. Although he works hard, his life is miserable. All most all the time he leads a subhuman life.