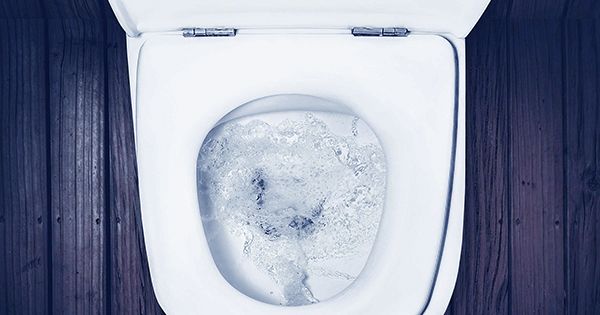 Many people don’t like spending more time in public toilets than absolutely necessary, but a new study provides one more reason to get out of the can as soon as possible after finishing your business.

New research published in the journal Fluids of Fluid reveals how flushing toilets produces large amounts of aerosolized particles – many of which contain viruses such as urine, feces and even stork-cov-2. Although respiratory droplets are considered to be the main source of COVID-19 infection, there is considerable concern about the role that aerosols may play in the spread of viruses. According to the authors of the study, public toilets deserve special attention because they are very poorly ventilated and a small number of durable viruses were detected in urine and feces samples.

To examine the rate at which flushing aerosols are generated, the researchers placed particle counters at different heights from both a toilet and urinal in a public restroom. The facility was deep-cleaned and closed 24 hours before the start of the experiment, and the authors described it as “operated under normal ventilation conditions.” The researchers flushed both the toilet and urinal five times over a five-minute period, observing how multiple flushing caused a build-up of aerosols.

Explained study author Dr Siddhartha Verma in a statement, “After about three hours of testing involving more than a hundred flushing, we have significantly increased the amount of aerosols measured in the surrounding environment, where each flushing test contains a total number of drops that have accumulated for tens of thousands of decades.” “Both the toilet and the urinal produce large droplets of up to 3 micrometers in size, which, if they contain infectious microorganisms, pose a significant risk of infection.”

These tiny particles were detected at altitudes up to 1.52 m (five feet) above the toilet, where they were found to remain stable for at least 20 seconds after flushing. At the end of the five-flush sequence, the researchers noticed a 69.5 percent increase in aerosols measuring 0.3 to 0.5 micrometers, a 209 percent increase in particles measuring 0.5 to one micrometer, and a 50% increase in droplets of one to three micrometers. Interestingly, keeping the toilet covered with a lid has been found to surprisingly reduce the amount of aerosol in a small amount, suggesting that many of these particles are able to escape through the toilet bowl and the top of the seat.