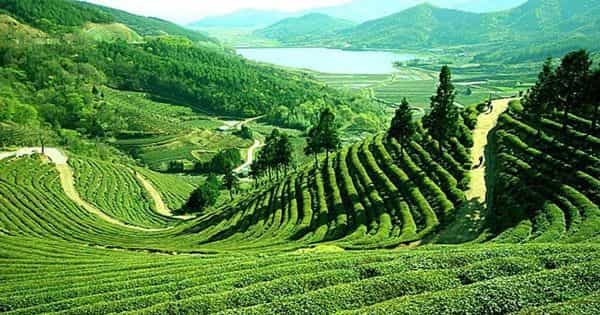 Tea – a Cash Crop of Bangladesh

Introduction: Tea is one of the most popular drinks all over the world. Almost all people take tea every day. It is still called `Cha’ in our country. It is made by infusing the dried leaves with boiling water. It belongs to ‘Camelia Sinensis’ of the family `Theaceae.

Tea producing countries/ where grown: Tea is obtained from a kind of small plant which had its origin in China. Tea-plant is an evergreen shrub. It is now grown in large quantities in India, China, Japan, Indonesia, Ceylon, and Bangladesh. Indeed, it is grown in tropical countries.

Tea is grown well in the hilly places where rainwater can’t stand at all. In Bangladesh, it also grows in plenty in the hilly parts of Sylhet and Chittagong. especially in the hilly slopes. Excessive rainwater is needed for the growth of tea plants but the rainwater must not stay at the root. So hilly countries are the best place for tea cultivation.

How grown/ cultivation: The cultivation of tea is not so easy. Tea plants require a moist climate for their growth. In the rainy season, tea-seeds are first sown in a nursery or in a small piece of land. The seedlings are then transplanted over vast areas in rows from four to six feet apart. The plants are watered and weeds are removed timely for the smooth growth of the plants. It grows twenty to thirty feet high in its wild state. But they are not allowed to grow very high in the garden. They are pruned/ trimmed so that they become bushy. They are not allowed to grow three to four feet high. When the tea plants are about four years old, the .eaves are plucked for the first time a year. Much care is needed in watering the young plants, removing weeds from beside them, and protecting them against worms and insects. The process of pruning is necessary for two reasons. First, if the tea plants are allowed to grow at will, they become sickly and do not yield a good crop. Secondly, it becomes difficult to gather the buds and leaves as it has to be done at regular intervals.

How gathered/How collected/Process of gathering/plucking/of leaves: Tea-plucking offers a lovely view. It is usually done by highland women. There are generally four crops a year, but the first crop is the best. The leaves are gathered or picked up in three or four phases or times a year. The first crop or picking is done in April, the second in May, the third in June, and the fourth in August. Three varieties of tea are gathered at each phase of plucking. First, the buds of -tea-plants make the best tea, secondly, the smaller leaves are next in quality to the buds, and thirdly, the larger leaves are less-flavored. The names of these three varieties are ‘pekoe’, `Souchong’ and Tongue’: A large number of coolies of both sexes go out in the morning. Each of them carries a basket at their back and gathers buds and leaves.

Production: After gathering been done, the buds and buds are dried in the sun or in a huge cauldron placed over a burning fire. Then they are rolled by a machine to press out the juice. The leaves are then spread out on the floor of a moist room until their color changes from green to copper. Then they are taken to a hot-air room where they dry up completely and become black and brittle. Thus they are made ready to be used for drink.

Preparation of tea/ How prepared: The preparation of tea is again a long and interesting process. It is very simple and easy. At first, water is boiled in a pot. Some tea-leaves are dropped into the boiling water. This is called liquor. After a few minutes, the infusion is then poured into cups through sieve or strainer. Then sugar and milk are mixed with it and thus we get a good drink. This is how a tasteful cup of tea is prepared.

Uses/ usefulness/ merits/ Impotence: The usefulness of tea in our life is really very great. It is a stimulant and refreshing drink. It is a favorite drink to all classes of people all over the world. It removes our fatigue and tiredness. It gives us energy for work. It is a cheap tiffin, to all It also helps us to keep awake. By exporting tea, our country earns a lot of foreign currency every year. We—can entertain our guests with. It is an antidote to cancer too.

Demerits: Tea is termed as a refreshing drink but it is not always good for health. In hot countries, it does more harm than good. Too much taking tea is bad for health. It kills hunger too. Immoderate use of tea results in dyspepsia and kindred complaints. So, nobody should form a habit of drinking excessive tea which is quite injurious to health.

Conclusion: The demand for our tea is worldwide. Its importance, especially in our national economy, can hardly be: t over-emphasized. It strengthens our dilapidated economy by bringing much foreign currency. So, we and the government should pay proper attention to increasing its cultivation and its prosperity.