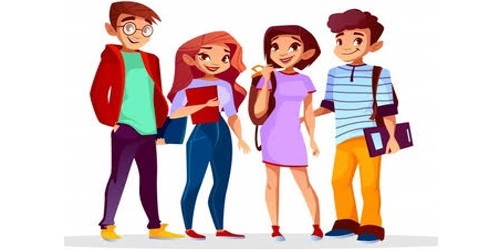 The teenage years can be difficult for parents and kids alike. Teenage is a period of twilight between childhood and youth. It is a period of wild excitement and better disappointment. In some ways being a teenager is the hardest chapter in your life. Loving attention paid by a young person of the opposite sex throws the teenagers into a state of raptures. Psychologically it is a great mess. Teenage is the time when a person is struggling to be born. They struggle with image, gender identity, self-confidence, and tons of emotional issues.

Teenage is an internal, psychological struggle against a part of oneself. The combination of hormonal changes, new academic and social challenges, emotional volatility and shifting family dynamics can feel overwhelming. At times, it is a struggle against one’s parents as also against those near and dear ones whom one has been used to take for granted for unconditional support. Young people going through the process of adolescence need what they have always needed from their parents.

The school reports of a promising and well-behaved student have given a sense of relief and joy to the parents. One has grown accustomed to the patronizing way the relations treat him and does all little things he is asked to do by his elders. Teenagers need ‘helpful attention’ rather than protective attention.

Truly speaking, unreserved awe and respect for the parents are the first casualties of adolescence. The hypocrisy of elders shatters his belief in the goodness of the world or of the universe. Teenage is equally problematic for the teenager as well as his parents. He finds the whole universe full of wonder and excitement. He wants to partake of the sensuous enjoyment of sights and sports.

The teenager’s mind is always restless. He also resents bitterly the inquiries regarding his movement and the persons he is friendly with. He shows a temperant when he is advised by his father not to read comic/fantasy or watch TV. series/serials. Teenagers also need the activity bit – and that doesn’t just mean ‘activities’ such as meetings or clubs but physical exercise. Everybody knows that a teenager is neither a child nor an adult. His parents do not have any business to tell him what and when to do.

Teenagers today seem surrounded by an overload of things to do and ways of taking in information. The teenager makes the teenager do something whimsically. He wants to materialize his own purpose by any means. He tries to do the work at his suit will. He expects none to meddle with his affairs. As a teenager has no farsightedness. He is always influenced by emotions.

Teenage is a period which leads a teenager to grow up emotionally. What teenagers want as much as when they were little is your love, your care, your respect, and your attention. He dislikes regulated life. They want to be noticed by you. Hence the parents must be alert in respect of their teenage children; otherwise, they will be nipped in the bud.